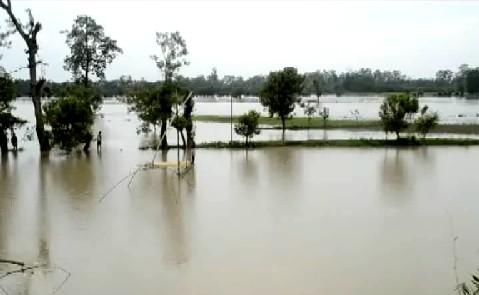 Chief minister Tarun Gogoi on Tuesday said that the flood situation this year is not critical till now. The government figures do not tally with media reports that has put the numbers of flood affected people to more that one lakh. According to government, number or affaected is around 37,787. “This time the flood is not critical, except that districts like Dhemaji, Lakhimpur and some parts of Chirang district have been affected by flood" said the Chief minister at Sankerdev Kalakshetrs after coming out of a official meeting. He added - "however we don't know what will happen tomorrow, but as of now it is under control".

“As of now there is no flood in Kaziranga though water is flowing, which is normal; wild animals are not affected nor any camps have been submerged”, said SK Seal Sharma, DFO, Kaziranga National park.

A total of 1,703.06 hectares of crops have been affected in three districts of Dhemaji, Lakhimpur and Chirang, reports Assam State Disaster Management Authority. Seven relief camps have been set up - five are in Dhemaji and two in Chirang district and all together 906 inmates are living in these relief camps. Till date there has been no report of human casualties. Last year around 5 lakh people were affected by flood in the state.