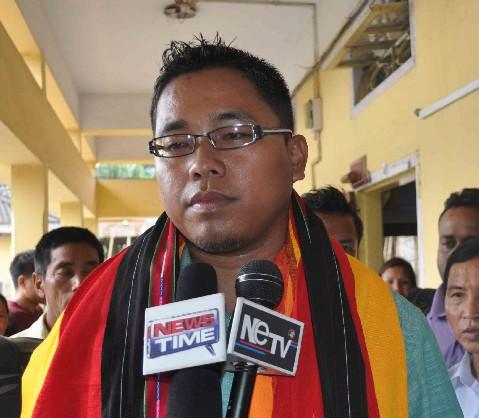 Ngamrothang Hmar was elected as the Chairman of the 11th N C Hills Autonomous Council unopposed as none of the other members filed nomination for the Chairman on Wednesday.

This was declared by the Deputy Commissioner Barun Bhuiyan at the NCHAC’s session Hall in presence of 23 newly elected members. Three members of IPP and Smt Ranu Langthasa of INC were not present in the session.

In the session, Kulendra Daolagupu, a member from congress proposed the date of election for the Chief Executive Member on June 13 and was accepted by all the members present.

Earlier the newly elected Chairman was accorded warm welcome by all the members.

Ngamrothang Hmar talking to media sought the support from each and every members while offering his heartfelt thanks to all the members who extended their supports to get elected unopposed.

9 Aug 2012 - 3:09pm | editor
Tinsukia again falls in the deep grip of gas leakage erupting in sparks of fire. In yet another forecast of impending danger of gas leakage, the local in Hilikhaguri have noticed fire a week after...

15 Apr 2016 - 5:11pm | Shajid Khan
As a part of the three-day programme for the celebration of Rongali Bihu. The first day celebration on Thursday marked with flag hoisting by the president of the celebration committee, of Xadou...