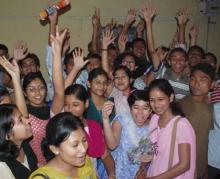 26 May 2009 - 5:29am | editor
The Assam Higher Secondary Education Council has declared the results of the Higher Secondary examinations of 2009 in science, arts and commerce streams on Tuesday. Chayanika Baruah from Kakojan...

19 Jun 2015 - 3:47pm | AT News
Federation of Industry and Commerce of the North Eastern Region (FINER) in association with Indian Institute of Entrepreneurship (IIE) is organizing a seminar on “Beyond the economic value of Green...

7 Feb 2016 - 10:29pm | Shajid Khan
The golden jubilee celebration of Jhargaon MV School held at Jhargaon  in Udalguri district on Sunday  with fanfare and gaiety. The inauguration of the newly-constructed main gate of the...