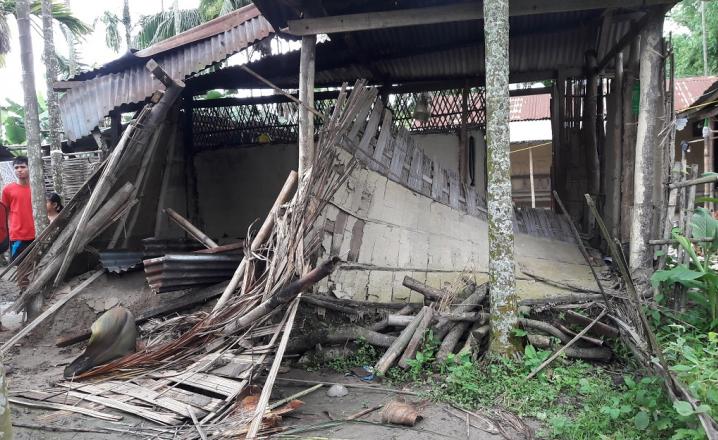 UDALGURI: The fury of wild jumbos continous unabated at Indo-Bhutan border villages in Udalguri.The Borengabari villagers near Ghagra are being frequented by wild jumbos every night as a result of which the villagers are spending sleepless nights. What has added to the woes of the villagers is the negligence of the forest authorities who despite repeated calls for patrolling the village leave the villagers to their fate.

In yet another incident the dwelling house of Pratima Kumar wife of Lt. Dibakar Kumar was vandalized by wild jumbos on Saturday night. "We were in the other room when a herd entered our courtyard and vandalized the room" said Ritumoni Kumar a B.A 6th semester student of Tangla College. "I have made several calls to the local forest office of Santipur but to no avail and they keep on making lame excuses leaving us to our fate" She added.

Another villager Tankeswar Deka said, "The forest office is just 3 kms away from our village but they never comes to our rescue the forest department has miserably failed in protecting our lives and properties." He also questioned that if such is the situation what is the use of such department. A villager on condition of anonymity stated that if the forest department doesn't wake up from its deep slumber as a measure of self defense we will take retialatory action against wild elephants .

The frequenting of the jumbos incident has casted a dark shadow over the poverty striken agagrian villagers who finds it hard to meet the daily needs. "The herd has been creating menace in the area which have descended down from hills in search of food. The elephants damaged houses and destroyed crops of several bighas in the area " said Nilotpal Kashyap a nature lover of the area.

The villagers have been spending sleepless nights for the last couple of days in fear of the elephants, he added. The forest department has also not been able to chase away the herds.

15 Mar 2014 - 2:28pm | AT News
Tension is simmering near Diphu after a group of people clashed with police at Matipung forest on Saturday.The incident took place when over 100 landless people were trying to occupy a plot of land...

ASDC condemns the killing and firing

15 Jul 2012 - 4:53am | Anup Biswas
The Autonomous State Demand Committee (ASDC) Dima Hasao District Committee condemned the killing of Swapan Dhar Choudhury, who was one of the old traders of Haflong town, by some miscreants at the...