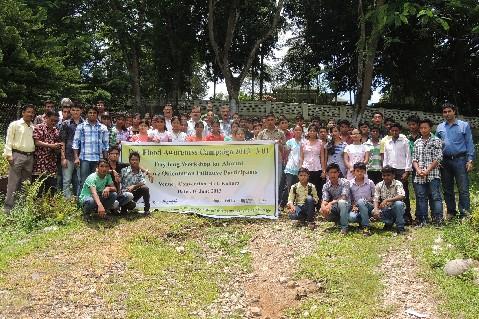 It was a day long workshop for Alumni of Nature Orientation Initiatives (NOI) participants with and objectives to understand the activities carried out by these young ambassadors of the park in their localities, to augment their present activities and to ensure involvement in various fields of conservation through proper motivation, guidance and training. The programme included sharing activities of the alumni participants in nature conservation in and around their localities and motivational talks.

The natural world is a wonderful gift we have inherited and is adorned with the resources we and our future generation is dependent. The Natural Environment in our region is in danger due to negative human behaviour that undermines the natural process. Correcting the harmful behaviour is the only means that human race would sustain on this earth for times to come. The challenges of the Kaziranga National Park in its surrounding environment are under steadily increasing threats from different anthropogenic activities.

Keeping this in mind we need to raise good stewards of the environment to care for issues like resource depletion, environmental pollution, land degradation, species extinctions and large scale deforestation.  The spiritual connection to the Earth teaches children and youth that they are a part of nature and must take care of both their surroundings and other people.

The day was started with greetings by Dr. M Firoz Ahmed of Aaranyak where Mr. Mrigesh Narayan Baruah, SDO (Civil) and Mr N K Vasu, Director Kaziranga National Park along with Mr. Tamuli, Range Officer, Kohora and Mr. Swapan Nath, Senior Journalist were present. Mr Uttam Saikia, the principal coordinator of the Nature Orientation Initiative which has been conducted since 2007, made a memorable presentation on the past NOI events that refreshed memories of alumni.

Mr. Baruah, in his short speech expressed concerns with ominous signs of young generation being involved in the rhino poaching and arms dealings around Kazirnaga National Park. He also lauded the effort of Aarnayak for its effort to create aware and create responsible band of young citizens around Kaziranga. He appreciated the effort of the Numaligarh Refinery Limited as part of their Corporate Social Responsibility. He added that it is the duty of each and every citizen of Assam to protect Kaziranga but the fringe villages have more responsibilities and the same is expected from these young ambassadors present today.

Mr. Vasu, Director, Kaziranga NP expressed concern that the people are becoming greedy and hungry for natural resources all over and the same is also hurting the Kazirnaga NP. He appealed to the concerned citizens and the young generation in particular to come forward to assist the authorities in saving the pride of Assam, Rhino in Kaziranga and their heritage.

While sharing their experience, since they participated in one of the NOI event since 2007, Biraj Chetry, an undergraduate student now, who is motivated to save wildlife expressed how he along with Brihattar Pegu from Agoratoli along with their friends helped saving animals in distress during flood. They well understand that rescue of an animal is the last option given them a chance to relax in a corner of the highland in their village as they go back into the park as soon as water recedes.

Similarly, Ms Lakhya Das and Manisha Borah, two young students from Bagori convinced their neighbours to chain their dogs during flood so that no harm is caused to animals transiting through their village. They were in tears when describing how  pet dogs attacked flood-displaced  deer including a pregnant deer during the last flood in 2012.

Abdul Ali from Bandardubi decided not only to plant trees in his garden but also in his neighbour’s garden. Further, Ajoy Teron from Natundanga village rescued tortoise, rhinos and deers near their village with the help of Forest Dept. and  because of his work he has been  selected as a member of the Eco Development Committee in his village. Tek Bahadur Chetry from Phuloguri had a different story to share. He fixed the water taps in the village supply line so that water is not wasted. As tap was costly and not supplied by concerned authorities, he just plugged those with stump!

In the latter half of the day Mr Tamuly, Range Officer Kohora range, shared his experience of working with communities in Kazirnaga and more recently in Pabitora Wildlife Sanctuary. As communities have acted like the guardian of the rhino in Pabitora there has been no poaching for 6 years in a row. He appealed all the participants to share their thoughts and concerns as and when felt necessary and assured prompt response from his team.

The programme was coordinated by Mr. Uttam Saikia, Senior Journalists from Bokakhat and Mr Swapan Nath, Senior Journalist from Kohora. Arif Hussain and Panab Bori, Project Assistants of Aaranyak have been coordinating the communication with the NOI participants for several years and motivating them to actively assist the forest department and NGOs in securing the wildlife.

The NOI is annually conducted by Aaranyak, WWF India and ATREE, with support from Assam Forest Department, local tourism business and likeminded people around the park. Since 2007 , there has been as many as six NOI events (a three-day residential programme). Several hundred school students were directly reached during these years. The organizers are overwhelmed by the motivation of some of the NOI Alumni and would ensure supporting them in future as well.

It is worth to mention that Aaranyak has been working for the last 24 years on various environmental issues with diverse impact on our society. Its tireless effort helped in creating a positive scenario in the region’s conservation movement and it has been instrumental in protecting many of the endangered species of the region like rhino, elephant and tiger through its intervention. For the last many years, it has been working in Kaziranga National Park (KNP) creating awareness, ensuring protection to animals and habitats by complimenting the management and trying to reduce the human wildlife conflict by organizing awareness meet.

Aaranyak is also planning to organize several pre-flood awareness camps during this month all around Kazirnaga National Park.

1 Apr 2013 - 9:10am | AT News
Normalcy prevails in Sualkuchi where curfew was relaxed for ten hours on Monday. The district administration relaxed curfew from 5 in the morning. Army was withdrawn from the silk village on Sunday... 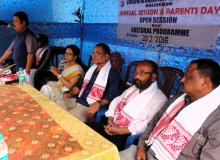