House Sparrow used to be one of the common birds in India and in many countries in the world. This well-known bird, which would fill our home gardens for foraging on insects and kitchen scraps or build nests on our roof and cavities of our house, but in recent days there has been a rapid decline in sparrow population in many parts of the world including India.  A number of hypotheses have been put forward as possible causes of decline of House Sparrows in urban and suburban area. These include changing architecture of human habitation that has deprived House Sparrows of nesting sites, loss of tree cover, excessive use of pesticides, lack of traditional granaries, grocery shops and storehouses that permit gleaning of grains by birds, air pollution and electromagnetic radiation.

In Assam House Sparrow is still common in many  urban and rural areas. From people’s perception it appears that there is a decreasing trend in the population of House Sparrow in the last few decades in Assam as well though we do not have authentic data. Modern cities and towns are no longer suited to the sparrow. Urban buildings (box type) are not attractive to the sparrow as these provide little opportunity to nest within. Finding food in and around nesting sites is a bigger problem in urban spaces where topsoil is covered with debris, roads and pavement. In earlier days sparrows were dependent on the extra grains thrown to them after people had cleaned their grains. This habit has ceased in urban areas as everyone is getting pre-cleaned grains from the bigger general stores and shopping malls and there was nothing to be thrown for the sparrows to feed on. This shows a shortage of food grains in urban areas of developed localities.

Therefore, this is the time of a common city dweller to come forward and to take some small and easy steps that could help sparrows to feed on and get their nesting substrates. There are few common things one can try to bring back sparrows in their houses - encouraging local shrubs and herbs rather than exotic plants in his garden and avenues to grow, letting few places of bare ground to be remained for dust bath and by adopting a nest box. World Sparrow Day is celebrated annually on March 20th to raise awareness across the globe about the decline of the House Sparrow and it impacts on our environment.

In Guwahati City sparrows are often found to nest on rolling shutters in shops. This is an indication that they could do well if they are provided with nest site alternative in the form of nest box. In Guwahati city the urban habitat is changing rapidly. With this idea, though not new, Anukul Nath, a Ph.D research scholar of Assam University, Silchar under the Department of Ecology & Environmental Science has taken an initiative under the supervision Dr. Hilloljyoti Singha of the same university and of Aaranyak and Dr. Bibhuti Prasad Lahkar of Aaranyak to assess the sparrow population in Guwahati city and to put nest boxes to understand the response of House Sparrow. The project is supported by the Aaranyak Small Grants for Nature Conservation in Northeast India in association with the Rufford Small Grants Foundation.  It could be mentioned that there has not been such scientific research about House Sparrow in the capital city of Assam. Anukul is also looking for nests of sparrows and their requirements besides monitoring the population periodically. Later in his study, he will also be investigating the effect of electromagnetic radiation on the breeding of sparrows. 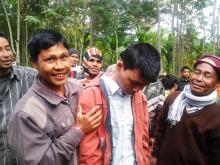 9 Sep 2014 - 8:55am | AT News
It’s a bio toilet that brings no less hope. Launched by the Defence Research Laboratory in Tezpur o Monday, the eco-friendly and affordable sanitation technology is best suited for defence personnel...