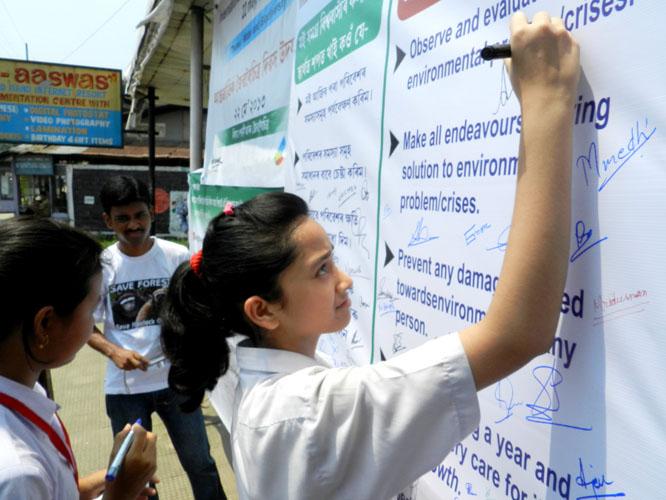 Aaranyak organised a mass signature campaign on the occasion of the International Day for Biological Diversity with the current year theme of Water and Biodiversiy on Wednesday. As part of the day-long programme Aaranyak team pitched tent beside Beltola-Basistha Road in the city to facilitate environment enthusiasts among the public and students to tender their signature  and take a pledged towards biodiversity conservation. About 100 students from Bal Bharati School at Survey participated in the programme along with common people  from all  age groups who have appreciated the novel initiative of Aaranyak. 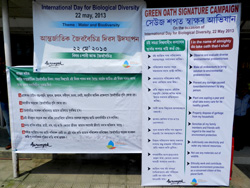 On this  occasion Aaranyak also expresses its deep concern at the deteriorating state of wetland in Guwahati city in particular and Assam in general. Deepar Beel which is the only Ramsar site in Assam has been severely affected because of unregulated human activities including encroachment, siltation due to unscientific hill cutting in Rani-Garbhanga forest in the vicinity. Deepar Beel acts as a storm water reservoir of Guwahati city and thereby plays a significant role in reducing flash flood in the city  and  recharging groundwater .

Aaranyak urges the chief minister of Assam to urgently initiate action to ensure protection and conservation of Deepar Beel in the greater interest of protection of biodiversity in greater a area.

Deepar Beel plays a vital role in sheltering waterfowls of residential and migratory nature. Beel has a perennial water-holding area of about 10.1 sq. km, which extends up to 40.1 sq. km during floods. The depth increases up to 4 m, and drops to 1 m during winter. This large water body is not only a food source and breeding ground for a large variety of aquatic birds but it also houses a wide variety of amphibians, reptiles, insects, macrophytes, terrestrial weeds, lianas and tree species of ecological and economic importance.

The Government of Assam declared 10.1 sq. km area of Deepar Beel as the ‘Deepar Beel Wildlife Sanctuary’ in 1989. It was also proposed that the 4.1 sq. km core area be designated a ‘Bird Sanctuary’; about 122 species of seasonal, migratory and residential birds visit the Beel every year. Considering the importance of the wetland, Deepar Beel has been included in Asian Wetland Directory and has been also declared as a Ramsar Site in 2002. 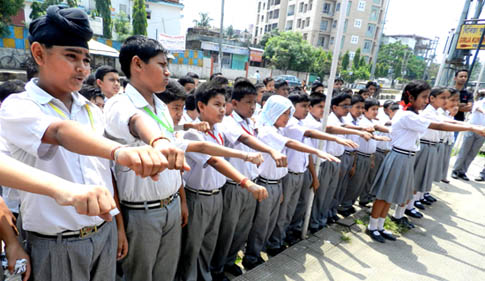 A majority of the biological wealth in the wetland is in a state of gradual depletion due to the increased impact of human interference. Although the area has been declared as Ramsar Site/ wildlife sanctuary, it has not received much attention regarding conservation.

The area is not well protected and there is no enforcement of strict laws of wildlife protection. Regular fishing both in the buffer and core zones also contributes to the degradation of the wetland.

10 Mar 2015 - 5:32pm | AT News
Just a year ahead of the assembly polls, Chief minister Tarun Gogoi seems to have targeted the small tea growers when he presented the state budget for 2015-16 on the floor of the House on Tuesday....