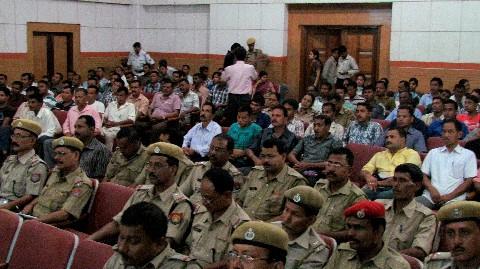 With an objective to enlighten police personnel of Assam about the importance of conservation of nature and wildlife for survival of humanity on World Environment Day (WED), Aaranyak, a premier bio-diversity conservation organisaton in the Northeast  today organised a programme in collaboration with Assam chapter of Institutions of  Engineers in India here.

A large number of policemen both in uniform and civvies attended the programme that focused on the important role the police could play in prevention of wildlife crime and conservation of biodiversity. All the participants took a Green Oath in the programme.

“1.3 billion tons of food gets wasted in the world per year while one-seventh of the global population remains either hungry or underfed and about 20,000 children below the age of five years die of hunger everyday in the world. But we are destroying forest to increase food production to feed the burgeoning world population. We have to think about it. All of us have a role to play in conservation of the nature for the sake of our future,” Bishnoi said.

He said that under this critical situation not only the policemen, but everybody in general especially in a populous country like India must love the nature and wildlife for their preservation.

Secretary General of Aaranyak, Dr Bibhab Kumar Talukdar gave a detail power-point presentation on wildlife crime scenario and the danger posed by it to survival of wildlife all over the world. He also explained how policemen could play a role in checking such crimes.

The Team Aaranyak today conducted total 14 WED programme all over Assam including several programme in schools located near Kaziranga National Park, at Numaligarh, Bokakhat, Bogaigaon and other locations. All the programme were well attended.

31 Jul 2012 - 10:04pm | editor
BJP veteran L.K. Advani on Tuesday said took on Delhi nd Dispur alleging inaction in dealing with the influx problem that has resulted in the on going ethnic clash in BTAD areas. During his visit to...