1) Three Match One day series starting on Tuesday (27th of June 2007). 2) One-off one-day match against Pakistan July 3. 3) A full tour of England where India will take on the hosts in a three-match Test series and seven one-dayers starting July 19.

18 Mar 2012 - 4:46am | editor
Good news for AIDS patients and their relatives. The Assam government on Saturday announced that it would give financial assistance to the next of kin of those who have died of AIDS. Health... 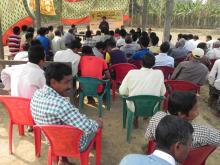 25 May 2012 - 12:09am | editor
The Assam government is set to launch a mega project to reclaim the land the state lost over the years because of erosion. Chief Minister Tarun Gogoi announced it on Wednesday in Sualkuchi where he...