The much-awaited Panchayat elections in trouble-torn Tirap district in eastern Arunachal Pradesh concluded peacefully on Thursday. There was no report of any untoward incidents from any polling booths. Tirap Deputy Commissioner and District Election Officer Dr Sachin Shinde has congratulated the presiding officers, polling officers and all those who were involved in the  electoral process. It may be mentioned here that there are 7 ZPM Anchal Blocks in Tirap district viz Khonsa, Khela-Lamsa, Lazu, Kapu,Deomali and Soha. Lazu and Khela-Lamsa ZPM seats were reserved for women candidates. In most of the Anchal Blocks the GPMs elected unopposed except in Lazu Block where elections had to be held in a number of villages.  In this PR elections live feed from 3 polling stations were streamed. However, due to inclement weather, the live feed was often interrupted. The inclement weather on the polling day did not deter the enthusiastic voters from casting their votes. Long queues were seen in many villages. The district administration and the district Police made elaborate security arrangements during the poll. Tirap Superintendent of Police Vikramjit Singh personally supervised the security deployment to ensure peaceful and flawless elections.

7 Aug 2016 - 7:26pm | AT News
The Asom Jatiyatabadi Yuva Chatra Parishad (AJYCP) has rolled out a slew of measures to help the flood-hit people by distributing some relief materials among them. In a press statement issued in... 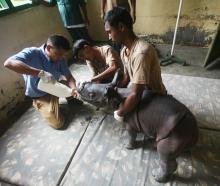 6 Jul 2015 - 10:57pm | Subhamoy Bhattacharjee
A neonate male rhino calf found alone in the wilderness of Agoratoli range is rescued by the Kaziranga forest staff and handed over to Centre for Wildlife Rehabilitation and Conservation (CWRC) the...