Krisak Mukti Sangram Samity (KMSS) took out a massive protest rally in Guwahati on Thursday, protesting against the Government for facilitating businessmen to acquire large plot of lands in and around Guwahati for industrial purpose. However the accusition of the lands by the section of businessmen have floated all the norms as accused by the KMSS. ”There has been a big land scam in Assam, 280 Bighas of government land has been given by the government for industrialisation costing Rs.15,000 only per Bigha and thus there has been a scam of Rs.1000 crore, besided a businessman called Kailash Lohia have bought 5000 Bighas of land in greater Guwahati” says Akhil Gogoi, who lead the protest to the DC court. Another Businessman called Suresh Pitnani has also bought 4000 Bighas from the indigenous people in gerater Guwahti which amounting Rs.2 Lak crore scam, adds Gogoi.

The entire protest was targeted at three businessmen viz. Kailash Lohia, Suresh Pithani and Ramavatar Bhurakia, besides the Congress lead Assam Government. Effigies of the three businessmen were burnt at the end of the protest. The protestors shouted sloguns against these businessmen and also demanded land rights for various indigeneous people living in forest, Chaar areas and for those displaced due to flood. More than 10000 supporters joined the rally demanding land rights and Pattas for the indigenous people.

At times when the Assam Government is depriving land Pattas to the indigeneous people, the government is facilitating land accusition by business tycoons in the name indistrialisation, which has also opened the door to rob the subsidy given the government under the North- East Indiustrial policy. The KMSS accuses that indistries set up by these businessmen are not benifiting the the state, instead helping them to earn subsidy that grown many times than their capital investment.

Gogoi also mocked at the Chief minister and businessmen during the rally. he has also demanded a CBI enquirey into the land scam.

Following the mass protest by the KMSS, the Guwahati traffic came almost to a stand still, causing chaos for vehicles and pedestrians. 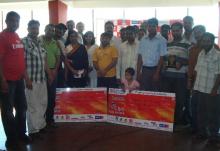 18 Oct 2008 - 1:44am | Nanda Kirati Dewan
Guwahati's favourite FM station, BIG 92.7 FM has announced the winners of this year's edition of the BIG Puja Awards, which was instituted by FM channel since last year in 2007. This year's...

3 Dec 2010 - 2:59pm | editor
The Oil and Natural Gas Corporation and Oil India Limited produced 13.73 MMT Crude Oil in Assam Sector during the Last 3 Years. The oil giants have spent about Rs 6.60 Crore in the state on social...

11 Feb 2019 - 10:29am | AT Kokrajhar Bureau
The 17th Bodoland Day was celebrated on Sunday at Green Field near BTC Secretariat Bodofa Nwgwr in Kokrajhar to mark the BTC accord signed in between centre  state and former BLT leaders on...