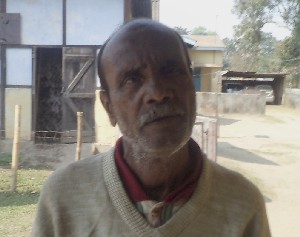 Jahar was thankful to the doctor because he got well very soon. Well, the doctor and others told him repeatedly to continue his medicine for six months but he was very confident that he had got rid of the monster disease. Jahar was very happy indeed. He was able to work. He felt fit and what else he needed? No way, he would not take the medicine any more. Why should he continue it even after feeling so much better? He stopped the medicine and resumed his age old habit of drinking country liquor. Why wouldn’t he? He could not even take the taste of it for last two and a half months while taking the medicines. But now nobody can stop him. He is fit and he would drink and eat to his heart’s content. Yes! This is the charisma of TB drugs that the person starts feeling very good jfust after two months!  Jahar was diagnosed with TB one year back. He got his medicine service from the DOTS provider as soon as he was diagnosed with tuberculosis infection and was given medication for TB. But alas! If Jahar had completed the full course for six months he would not have got it again! No mercy! This time it is so strong that normal TB drugs failed to work! Jahar is now Multi Drug Resistant-TB patient.

Poor diagnosis, misuse and mismanagement of powerful TB drugs (antibiotics) create strains of TB that are very difficult to cure. When a TB patient is given wrong prescription or the patient starts but does not complete the full course of drugs, the bacteria grows stronger and his body develops a resistance to these drugs and they do not work against the infection in his body. “Nearly 4% of new TB patients have MDR strains of TB: among patients who had been treated for TB before, about 20% have MDR TB, according to WHO” (Time, March 4, 2013). Moreover, XDR i.e. extensively drug resistant TB has been found in 84 countries. East and Southeast Asia, Eastern Europe, South Africa, Russia and India have alarmingly high rates of drug resistance. Apart from that, India, Italy and Iran have reported cases of TB that do not respond to drug which is termed as XDR (Extensively Drug Resistant TB) and TDR(Total Drug resistant TB). That means after few years from now we will have to fight with an epidemic which has no treatment!

Tuberculosis was once known as consumption disease since it causes severe weight loss. It is an airborne, contagious disease. The symptoms of TB are coughing (often producing blood), fever, night sweats and chills. It typically settles in the lungs (called pulmonary) but it can attack any other part of the body (called extra pulmonary). Malnourished people as well as HIV infected people are particularly vulnerable to TB. It is a surprising fact that one third of the population living in the world today carries TB bacteria. Most TB infections remain dormant and are asymptomatic, but it becomes dominant in a person with weak immunity. TB is usually treated with a combination of four drugs, namely, rifampicin, isoniazid, pyrezinamide and ethambutol. When a patient does not respond to isoniazid and rifampicin, (he may or may not respond to other anti-TB drugs), it is termed Multi Drug Resistant Tuberculosis or MDR-TB. TB is one of the world’s deadliest diseases, killing 1.5 million people in 2o11. According to WHO forecast, there will be over 2 million cases of MDR-TB from 2011 to 2015. Only 10 percent of new MDR cases get proper treatment. In India, 2 people die in every 3 minutes from TB. About 2 million Indians develop TB each year. The Indian government alone manages almost a quarter of the world’s TB burden. A person with active TB can infect up to 15 others in a year. It is estimated that there are 203 TB patients in India among per 100,000 populations. So, more the population means more TB cases.

Assam Scenario: Assam has the highest number of TB cases and Arunachal Pradesh has the highest detection record among the northeast states. In Assam, the number of TB patient initiated on treatment during the year 2011 was 56,788 (Jan -Dec). In the year 2012 about 37000 new TB cases were registered. Number of MDR-TB patient in 2012 is 246. A study of TB occurrences and treatment was conducted in 10 tea estates under Dhekiajuli TB unit of Sonitpur district. The population under the Dhekiajuli TB unit is 513765 (2012). The total number of TB patient in 2010, 11 and 12 are 822,779 and 781 respectively under Dhekiajuli TB unit. The numbers of MDR TB cases diagnosed from 2012 till date under this unit is 13. The population in 19 tea gardens is 61774 under Dhekiajuli DMC and Dhekiajuli TE DMC. The total number of TB patients in these gardens is 253 and 1 patient is diagnosed with MDR-TB. Since there is a tendency of defaults amongst the tea garden labourers (including temporary workers) on taking drugs regularly, therefore chances were high of patients having MDR-TB strains. It is for the relentless effort of Dr. Manik Roy ,his colleague Dr.Bikram Doley and their TB control team that MDR-TB cases are rare among this extremely vulnerable community.

A new TB patient is prescribed six months of a combination of four medications, i.e., two months of intensive treatment followed by four months of continuing care. It is very crucial to follow the regimen. Under RNTCP government provides DOTS free of cost to all TB patients who are registered in government system.  If patients do not respond to this line of treatment, or if they test positive for drug resistance, they are given second line of drugs which are more powerful. The government recommends the DOTS plus treatment regimen for such patients. These drugs are highly toxic and are part of grueling 18 months schedule. Because of these two reasons MDR-TB treatment is largely unsuccessful in reality. Undernourished patients find it hard to ingest these drugs as they cause acidity.

Patients who are suspected of having MDR-TB has to go through various tests like sputum culture test, drug susceptibility test etc. One has to wait for about 8 weeks for results. But the new machines like Gene Xpert can give results within just two hours. Since the machine is very expensive it is installed in only 18 hospitals in India. In Assam, two such machines are installed. One is in Lokopriyo Gopinath Bordoloi TB & Chest Hospital in Guwahati and second one in Hajo. At present, Only Guwahati Medical College Hospital is equipped with IRL facility to confirm MDR-TB. Assam Medical College and Silchar Medical College will be equipped with these facilities very soon. MDR-TB cases from the states of Meghalaya and Tripura also come to Guwahati for the tests. If a patient is diagnosed with MDR-TB s/he is admitted in Lokopriyo Gopinath Bordoloi TB & Chest Hospital in Guwahati for the six months intensive course of drugs. After that, the patient has to again go through some tests. If the results are satisfactory then the patient is referred to the local TB district hospital for the continuation period. The medical officer Dhekiajuli TB unit, Dr. Manik Roy and the SDMO of Dhekiajuli PHE Dr. Anuradha Baruah expressed their concern that it is still very difficult to diagnose extra pulmonary TB (if it occurs in throat or gland) because of lack of equipments and technicians in District TB hospitals. These dedicated health officials feel that all the District TB hospitals should be properly equipped for conducting FNAC or scan etc to expedite diagnosis of any extra pulmonary TB.

Coming back to the situation of India, the government plans to make TB drugs free in the private as well as public sectors. Most of the people do not get scooped into the government system because of inaccessibility of the services. If this move on the part of government well implemented, we could expect an enormous impact on the spread of the disease and on drug resistance. On the flip side, if it is not done right, wider use of powerful second line drugs could make resistance worse. Till date, more than 50% of TB patients are treated in the private sector which is totally unregulated. Studies in other countries have shown that getting the private sector involved is very important for containing the disease since it increases diagnosis of TB cases. The states of Tamil Nadu, Andhra Pradesh and Maharashtra etc. have already started the initiative to extend the TB treatment service to private sector including over the counter medicine shops. In Assam, except the tea garden hospitals, private health sector is yet to be included in RNTCP. Of course, ASHAs under NRHM and private DOTS providers are delivering a lot. Recently, a notification has been served to all private sector heath service providers to report the local RNTCP unit if any case of TB is found. Five NGOs are engaged in Assam as communication facilitators to intensify the Advocacy, Communication and Social Mobilization activities in the state to control TB. Private sector as well as NGOs could be a vital part along with public sector in containing and eliminating TB. There is an urgent need to carry out rigorous efforts to educate and inform people about the slow and silent emergence of MDR-TB. 245 is quite a bothering number. The tea garden community which contributes more than 17% of the state’s population is specifically vulnerable to TB or MDR-TB because of their lifestyle, food habit, living condition, lack of learning and lack of motivation. The Dhekiajuli TB unit is under the Sonitpur DTU has been trying hard provide proper treatment to the patients and to diagnose resistance strains. With all type of challenges in population pattern they have been able to attain almost 84% success rate in last three years.

It is time for action. Only timely measures including equipments, drugs, infrastructures, public private partnerships, community participation and above all political goodwill can manage the situation. We have to do something to stop TB. If MDR or XDR or TDR TB(Total Drug Resistant TB) spreads we would be facing a new “Black Death”.

26 Jan 2012 - 3:24pm | editor
Utter sensation prevails in Sonari after security forces recovered a crude bomb on Thursday morning. The bomb was kept inside a bag and was planted in Dihgalipukhuri which was spotted by the...

7 Mar 2014 - 8:38am | AT News
A body inside an abandoned car seems to have put Jorabat area in flutter on Friday morning.The car was spotted by the local residents who informed the police.Later police recovered a body from this...