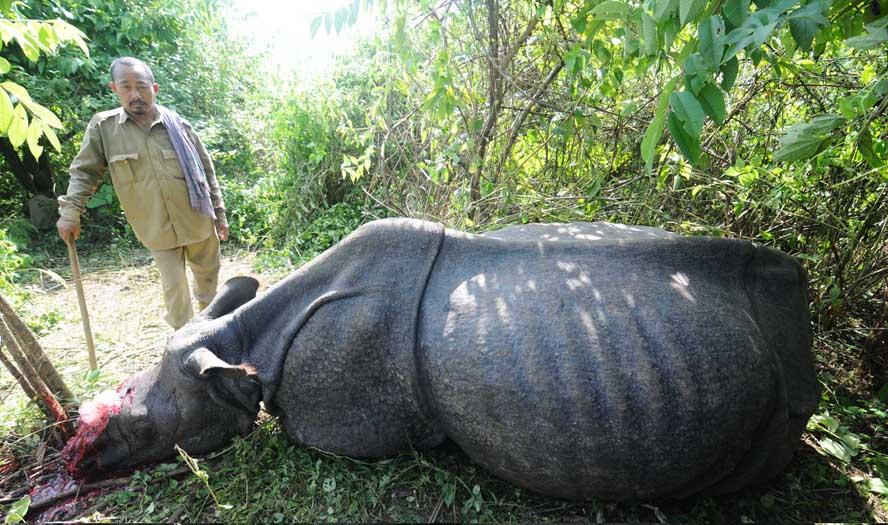 Poisoning rhino horns may be the best measures in Kaziranga National Park (KNP) to check unabated rhino poaching and save the species in the brink of extinction. Since rhino horn or horn-washed water is consumed mostly in China and Southeast Asian countries as medicine and with some superstition. So if horns of live rhinos be poisoned in live rhinos it will be useless. If someone takes or consumes such poisoned horn, that person will be seriously ill rather than any cure or superstitious feeling. Of course, the poisoning must be in such a way which will not harm the rhino itself and when one rhino squeeze other rhinos.

The poisoning method has already been applied to save African rhinos. In an attempt to prevent the poaching of rhino horns, a game reserve in South Africa is trying something different and poisoning the horn may be the best effective way. According to a TIME report, wildlife managers are injecting the horn with poison that would make people who consume the horn “seriously ill.” The poison is medley of parasitecides and permanent pink dye. Though the poison is not considered fatal, anyone who ingests the tainted horn will experience symptoms, like nausea, stomachache and diarrhea, the Guardian reported. The poison will make consumers think twice before eating the horn. If the poisonous horns make consumers ill the demand and use will be fall effectively which may decline poaching too.

The Sabi Sad Game Reserve in South Africa has already injected the poison into more than 100 rhinoceros horns over the past 18 months to deter international poaching groups. It is reported than none of these rhinos were harmed during and after the poisoning process. The wildlife managers in South Africa are warning would-be poachers and consumers with a media campaign and are posting notices in different areas. Moreover it said that airport scanner can also detect the dye, whether it’s contained within a whole horn or ground into powder. Rhino horns poached in Kaziranga are smuggled to Nepal, Myanmar and Nagaland, the neighbouring state of Assam. It is reported that smugglers are taking new method ground it into powder before takes off by air to the final destination. Rhino horns currently sell for their weight in gold- sometimes more in markets in China, Vietnam and some Southeast Asian places where they are used in traditional medicine a condiment in some delicacies. In China, apart from rhino horn, tiger bones are also used in traditional medicine and these are sold without any restriction within the country.

It is to be noted that KNP authorities are using aerial drones to oversee the poacher movement in the sprawling park. But it is sure that it will not help to curb the poaching totally. Weather condition, forest canopy may debar aerial surveillance and the time gap between monitoring and anti-poaching action may put the drones ineffective. So other measure like poisoning must be taken to bring back the rhinos on the verge of extinction must be implemented.

So far this year more than 16 rhinos in Kaziranga National Park have been killed and 22 were killed in last year for their horns. The total population of Asian rhino is not more than 4000 including the captives. A rhino census conducted in Kaziranga two weeks ago put their number at 2,329 up from 2,2290 in 2012.  If measure like horn poisoning is not taken seriously the species will extinct within 25 years in wild in the context of the rate of the poaching and current protection trend.

28 Dec 2008 - 4:11pm | editor
There is report of vertical split in the National Democratic Front of Bodoland. The chairman of the Bodo rebel outfit DR Nabla has claimed that he will lead the outfit despite the earlier order...

11 Jun 2008 - 3:47pm | Ritupallab Saikia
A public meeting was held recently at Golaghat to discuss about the ongoing crisis in Numaligarh Refinery Ltd (NRL). The meeting was attended by people from various walks of life. Representatives...

18 Jul 2012 - 2:42am | editor
Stung by widespread criticism specially after Chief Minister Tarun Gogoi's office issuing a press release with the name and photograph of the young girl molested outside a pub in Guwahati, National...