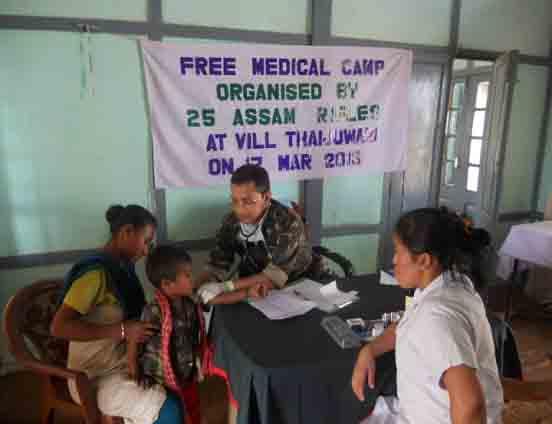 As a part of its drive to provide facilities to the locals in the remote areas, The Assam Rifles carries out various civic action programmes from time to time. These efforts bring out the humane face of the security forces and act as a confidence building measure.

A medical camp was conducted by 25 Assam Rifles under the aegis of HQ 22 Sector Assam Rifles at Thaijuwari on Sunday in Dima Hasao District in which locals from the remote villages in and around Thaijuwari area of Dima Hasao District availed the facility of free medical treatment . The medical camp was organized in conjunction with Holy Spirit Hospital. Dy Comdt Kaushik Handique, Medical Officer of Assam Rifles along with nursing assistants from Holy Spirit Hospital, Haflong  attended to the patients.

Men, women and children were checked and their ailments were addressed by the medical team. Besides providing free medicines for the various ailments the patients with dubious symptoms were also referred to Govt Medical Hospital. Free diagnostics test for malaria was also conducted by the team. The Medical officer also educated the locals on health and hygiene issues arising because of the coming summer months. Around 104 villagers benefited from the medical camp.

The event witnessed unprecedented synergy between the civil population and the security forces and will definitely help to foster good relations between them.

22 Jun 2016 - 4:25pm | Jayanta Kumar Das
One Lawa Majhi (45) was killed by a loner wild elephant at Bormukali near Nonai forest range office in Udalguri district last night at 8 pm.The person was coming home from market while came on the...