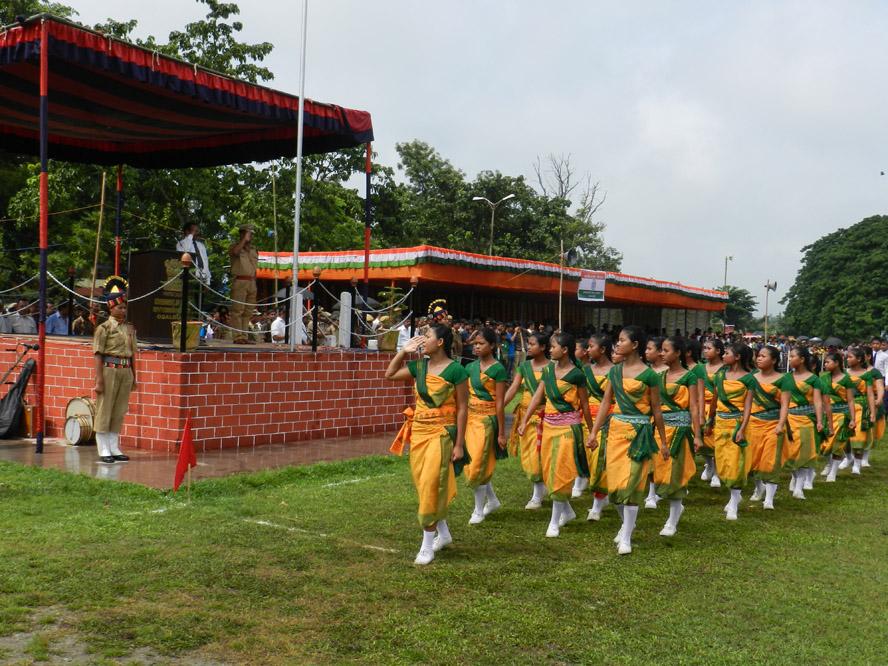 The 64th Republic Day celebrated at Udalguri with gaiety. At the Parade Ground of DC’s Office, Udalguri. Thaneswar Malakar,Deputy Commissioner, Udalguri offered floral tribute to the Father of the Nation “Mahatma Gandhi” at Gandhi Smriti at 8-45 AM, before inspection of guard of honour. Several contingents including police,para military forces and students took part in the march past. The DC hoisted the tri-colour at 9.00 AM in presence of the around five thousand people. On the occasion DC Malakar gratefully mentioned sacrifices of all known or unknown heroes of India's freedom struggle. He also spoke on the development that had been implemented in the district. DC also thanked people of Udalguri for maintaining peace while the whole BTAD was burning. Distinguished guests namely- Col.DK Bose, C.O. Mighty Fine Regiment of Red Horns Division; Debajit Deori, Superintendent of Police,Udalguri and Kulen Talukdar,ADC,Udalguri etc attended the R Day flag hoisting ceremony. Udalguri district administration felicitated Sahitya Academy award winner Kamal Kumar Tanti.

Attractive science based models were displayed by child scientists of various schools from Tangla,Kalaigaon,Udalguri beside stalls of different government departments and SHGs. Fruits were also distributed amongst the patients of ‘200 beds Civil Hospital’ at Udalguri in connection with the celebration of Independence Day. Spectacular cultural items were performed by students and youths of the district.

AT KALAIGAON: At Kalaigaon,Dina Moni Das,Circle Officer,Kalaigaon Revenue Circle hoisted the national flag at Gandhi Bakori field, Kalaigaon in presence of thousands of people. The Circle Officer paid floral tribute to thousands who had sacrificed their lived for Mother India. Cultural events were also arranged on the occasion by boys and girls. At Jawahar Navodaya Vidyalaya (JNV) Kalaigaon campus, Madhab Sarma,Principal, JNV, Kalaigaon hoisted the tricolour. Spectacular cultural items were presented by students of the school. A friendly cricket match between SBI Mangaldai branch and JNV Darrang was also played in the afternoon.

19 Nov 2007 - 2:27am | Rituparna Goswami Pande
“The aim of education is the knowledge not of facts but of values,” a maxim which seems to have lost its true meaning in the rampant commercialization of education in our present day....