Over 50 people have been injured when an ATSC bus overturned in the outskirt if Guwahati on Friday. The accident took place when the Assam State Transport Corporation owned bus on its way to Guwahati from Barpeta, was trying to overtake a truck when it overturned and rolled down the road to a nearby field in Nayanpur area.

The condition of five injured was stated to be critical. They were admitted to the Guwahati Medical College Hospital, while the others are being treated at the Hajo Primary Health Care centre.

2 Mar 2014 - 5:10pm | AT News
The Tarun Gogoi government has come in for sharp criticism hours after police arrested Akhil Gogoi in connection with the recent self immolation of a KMSS activist in Dispur.AGP president Prafulla... 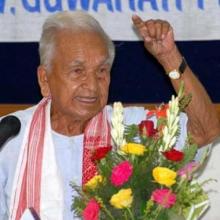 1 Feb 2009 - 10:46pm | biku006
30th January is a special day for the nation for peace and harmony as being the day of Father of nation’s death anniversary. Born in 1917, veteran freedom fighter shri Paniram Das of Kalaigaon...