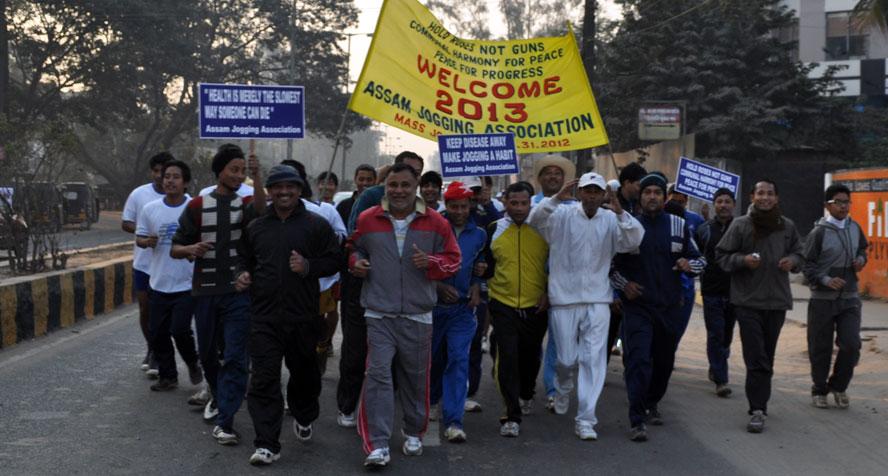 A Mass Jogging program was held on December 31, 2012 under the auspices of Assam Jogging Association (AJA) to welcome the New Year 2013. Mahadeb Deka noted body builder of international fame has flagged off the march at 6-45 AM from Janata Bhawan Play Ground, Dispur, Guwahati. The m march return from Zoo Road Tiniali and completed 7 kilometer round. A meeting was held after the Mass Jogging at the Janata Bhawan Play ground which was presided over by the President of the Association Geetartha Pathak.

The Association felicitated Mahdeb Deka. Deka appealed to the younger generation to be fit by doing physical exercise and jogging. Deka also asked them not to resort to the extravaganza in the New Years’ Eve and rather observe it in a healthy way with a message to the people. Assam Jogging Association’s theme of this year Mass Jogging is “Hold roses not guns, Communal harmony for peace and peace for progress”. It is to be mentioned that AJA organizes the program on the last day of the year to welcome the New Year with an appropriate message that suits the time.

Youth picked up for vote rigging

26 Apr 2014 - 1:35pm | AT News
Kamrup Police have picked up a youth on Saturday acting on the allegations of rigging at a polling booth in North Guwahati where he was deployed as a VDP member.Identified as Bimal Boro, the youth...

8 Aug 2012 - 2:18pm | editor
Railway Police arrested one person in connection with sensational murder of Pritam Bhattacharjee last month.Identified as Chhatu Sahni, the accused has been arrested based on information given by two...