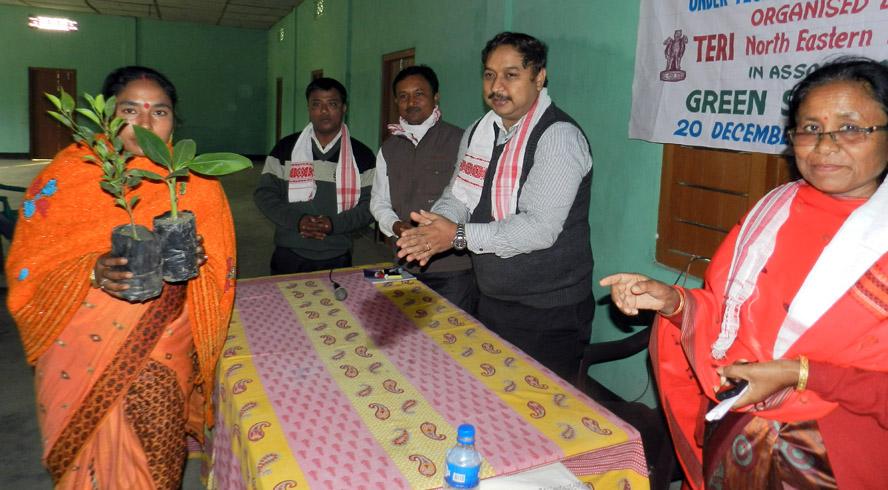 The training programme was inaugurated by Makani Saikia,President,Lakhimpur GP at 11 AM. She in her speech requested farmers to plant banana,orange etc in their vaccant plots of lands. Senior journalists of Udalguri district namely Jayanta Kumar Das,also the Hony. Wildlife Warden of Assam and Kanneswar Deka also spoke on the occasion requesting farmers to start plantation of horticultural saplings for economic growth. Former ACS officer Dipankar Saharia, Coordinator, TERI North East Regional Centre, Guwahati attended the programme as the chief guest. Addressing participating progressive farmers, Saharia requested them to take up horticultural activities not as government schemes but as their own project. He also advised farmers to change out look and to encourage horticulture or agriculture on commercial basis. According to him separate plots of lands must be utilized for various horticultural items like orange,bamboo,banana,peeper etc for better results. He advised farmers not to use harmful chemical fertilizers and pesticides but organic manures. Krishna Ranjan Deka,Dharanidhar Nath, Suren Barua (Zilla Parishad Councillor) also addressed people. More than hundred progressive farmers from various places of Kalaigaon constituency took part in the training programme.

How does the President of India get elected? Ã¢â‚¬â€œ Rebati Neog

15 Jun 2007 - 5:30am | editor
The President of India is elected by an electoral college, comprising the Members of both the Houses of Parliament as well as the MLAs of all state Assemblies. The total number of members in the...

29 Jan 2014 - 7:41pm | AT News
At least ten people were killed and over 20 have been injured in indiscriminate firing by miscreants along Assam-Arunachal Pradesh border in Sonitpur district on Wednesday.The incident took place at...