Good news for government employees. Dispur has raised the Dearness Allowance and Dearness Relief for its employees and pensioners from 65 to 72 per cent. The revision is effective from July 1.
Following the increase, the DA will be at par with Central Government employees.

The arrear will be paid in cash and an additional expenditure of Rs 400 crore will be incurred by the Government during the current financial year. 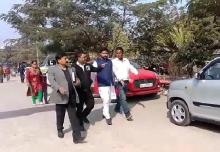 21 May 2014 - 9:14am | AT News
At least nine people were killed and five others sustained serious injury when a truck collided its head on a winger in Goalpara district on Wednesday. The tragic mishap took place at Dhupdhara at 5....