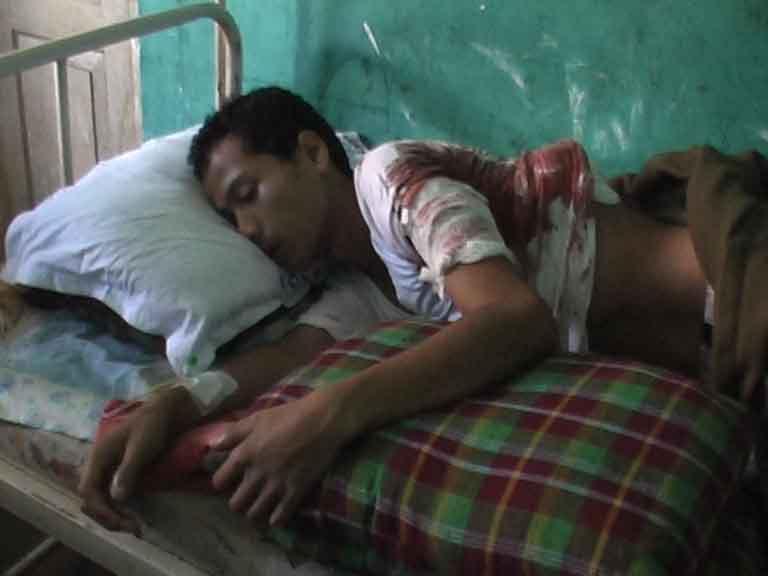 In a bizarre incident one Swapanjay Jorosa, 22 years, a student leader of Haflong Govt College was critically injured when a miscreant shot at him at his residence at Lower Digrik village some 3 km from Haflong Town at about 10 pm on Saturday.

The villagers immediately brought him to Haflong civil hospital and he was operated upon to remove the bullet from his body. His condition stated to be stable.

The police immediately rushed to the spot and launched combing operation to nab the culprit. No one was arrested so far.

According to eyewitness, a group of miscreants dressed in army uniform came to the residence of Swapanjay and knocked the door and as soon as Swapanjay opened the door the miscreant immediately fired at him, and fled from the scene taking the advantage of load shedding.

11 Jun 2014 - 9:58am | AT News
Forest guards in Kaziranga claimed to have killed a rhino poacher at an encounter on Wednesday. But four others managed to flee from the spot. The heavy gun battle took place near Gobrai forest camp...

11 Feb 2014 - 9:04pm | AT News
Come February 25. Assam Congress is gearing up to hold a huge rally to be addressed by Rahul Gandhi in Guwahati.Disclosing this, senior Congress leaders told Assam Times that Gandhi is scheduled to...

4 Apr 2014 - 6:24pm | Amrit Sharma
O ye young Boys & Girls ,Those who’ve come of Age,It’s time for you to decide –Who shall act on the Grand stage . You are the Majority ,The seventy-five percent of our Motherland ,Arise from...