The 20th National Children's Science Congress (NCSC) Udalguri district session concluded at Kalaigaon on September 28 recently with day long programme.Child scientists from 25 schools of the district from Tangla, Kalaigaon, Dimakuchi,Udalguri,Rowta,Orang,Bhergaon,Mazbat presented 46 science projects on the focal theme “Energy:Explore,Harnes and Conserve” at Kalaigaon Secondary school.The science programme was inaugurated by Jagadish sarkar,MCLA,BTC after hoisting of flag by Obedur Rahman,Principal,Kalaigaon Secondary school at 9 am. Thaneswar Malakar,Deputy Commissioner,Udalguri attended the programme as the chief guest.He visited all the three project presentation halls.The DC also talked to the child scientists and judges.He thanked students for their involvement in scientific activities for the welfare of the man kind. A panel of eight judges including NCSC specialists Tarun Deka,Coordinator of Kamrup Metro and Jayanta Pathak of Aranyak,Assam eveluated the science projects for the selection of ten best projects for the state level programme to be held at Biswanath Chariali from 15 to 18 October,2012. Kamal Prasad Sarma,President of the receiption committee offered vote of thanks at the end.It needs mention that Assam Science Technology and Environment Council, Guwahati has been organizing the NCSC activity in Assam.

7 Nov 2016 - 4:19pm | AT News
Caught in a deep dilemma over the citizenship amendment controversy Assam Chief Minister Sarbananda Sonowal is hunkering down with Rajnath Singh in New Delhi on Monday. Sonowal, who has arrived in... 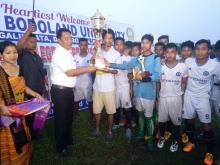