Chief Minister Tarun Gogoi on Friday conducted an aerial survey of flood-hit districts on Friday.
Gogoi laid thrust on relief and rescue of the marooned people. At the outsit he reached Jagiroad and visited the affected people in Moigaon where the victims alleged non receipt of relief materals. Then he left for Darrang, Sonitpur, Lakhimpur and Dhemaji apart from Kazaringa National Park and the Majuli. 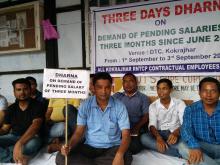 1 Sep 2016 - 9:34pm | AT Kokrajhar Bureau
Services to the Tuberculosis Control Programme in Kokrajhar saw paralyses following strike carried out for three days demanding early release of arrear salaries beginning from Thursday along with...

11 Dec 2008 - 3:43pm | editor
Three hardcore DHD(J) cadres have managed to escape from jail in Haflong by exploding a powerful grenade early in the morning on Thursday.According to information, the rebels namely Danila Dimasa,...