Book on philosophy released in Delhi 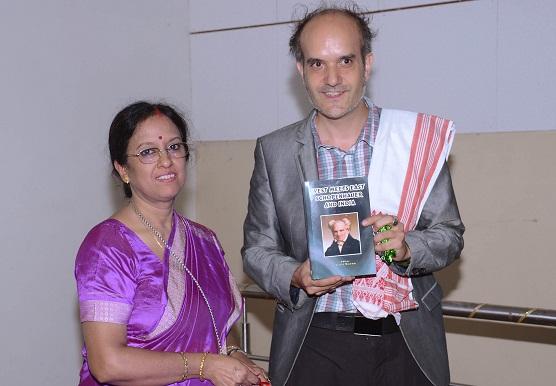 The Max Mueller Bhavan, New Delhi formally released a book, on September 18, titled “West meets East: Schopenhauer and India”, edited by Arati Barua under their specific program “Germany and India 2011-12 : Infinite opportunities”. Robin Mallick , Program director South Asia region formally released the book. Astrid Radunski, cultural counselor of the Embassy of Federal Republic of Germany in New Delhi, spoke about IDSS and its work. Professor Nirmalya Narayan Chakravorty , Member Secretary of Indian Council of Philosophical Research (ICPR) who Chaired the session, delivered a lecture on about the book . Professor Matthias Kossler, honorable President of the International Schopenhauer society in Germany sent a greeting Note to the distinguished participants. Dr. Ajay K. Arora , the Principal welcome the distinguished guests. The significance of the book is that this is the 2nd book on ‘Schopenhauer and India’ compiled by Arati Barua in a collaborative research with the Schopenhauer research center at the u of Mainz, Germany. The third book “ Understanding Schopenhauer through the prism of Indian Culture: Philosophy, Religion and Sanskrit literature” is forthcoming from Germany – the publisher is De Gruyter. There are three editors of this volume- Prof Matthias Kossler and Mr Michael Gerhard from Germany and Arati Barua from India. This will be the first of its kind where both German and Indian editors are working together on the relationship between India and Schopenhauer but otherwise it is 3rd book in the series.

Department of Philosophy, Deshabndhu College, New Delhi also organized a talk for Professor Yasuo Kamata from Japan on ‘Tat Tvam Asi and Compassion: Schopenhauerian Ethics in the perspective of comparative Religion’ in her college.

28 Jul 2007 - 12:23am | editor
Raha : World Bank officials from Nigeria Mr D Zaudu,Mr Ligachi and Dr M Patri visited the Sub-divisonal agriculture office of Raha in July 25th. They had a talk with the farmers of the locality and...

2 May 2014 - 8:19am | AT News
LPG scarcity is likely to hit the north eastern region hard again. The LPG dealers association in the region is on a 48 hour strike from Friday in protest against the shifting of the tender process...

7 Jul 2015 - 4:36pm | Hantigiri Narzary
At least six bike lifters were arrested by police and fifteen bikes also recovered from various parts of the town in Kokrajhar district. According to a senior police officer in Kokrajhar told...