Blast in the Time of Festival: 5 dead, 20 injured

Guwahati: In yet another ‘handiwork,’ ULFA explodes a powerful bomb in the busy Machkhowa areas on Saturday morning at around 7-30 which left four people dead and more than twenty injured.

The blast that rocks again in the time of the grand Ambubachi mela atop Kamakhya and Asian Athletic Grand Prix at Sarusajai, took place in front of a mosque. All those four were killed on the spot.

The bomb was placed beside a small tea stall at the daily fruit and vegetable market. Most of the vendors and visitors were not present in the morning when the bomb exploded.

The injured people have been admitted to the nearby hospital for treatment by the people who rushed to the spot hearing the huge sound the blast made. The conditions of four of these people are critical.

Immediately after the incident, police and top ranked police and civil officials including the Deputy Commissioner Abinash Joshi arrived in the spot and started investigation. Later talking to the reporters on the spot, Mr Joshi says the blast is a handiwork of ULFA.

Meanwhile, the city police beefs up security arrangement in view of the grand fair and festival at the Kahakhya temple and also to ensure security to the athletes across the Asian countries in view of the 16th Asian Grand Prix. The event is inaugurated on Saturday by Chief Minister Tarun Gogoi.

Panic spreads among those who gatecrash the Kamakhya temple premises to participate in the on going Ambubashi fair. These people have arrived in the fair spot from the last week.

Permalink Submitted by A. R. on Sat, 23/06/2007 - 15:07
The explosion took place at Machkhowa and that too in front of a mosque at 5.30 A.M. and not at 7.30 A.M. The time 5.30 A.M. of Muslim Fajar Salah( morning prayer ) Immediately after the incident, police and top ranked police and civil officials including the Deputy Commissioner Abinash Joshi arrived in the spot and started investigation. Later talking to the reporters on the spot, Mr Joshi says the blast is a handiwork of ULFA. How can A. Joshi imediately blame ULFA without proper investigation. This is second blast in Muslim area within weeks. The last week was - The explosion took place at a predominantly Muslim area in village Gulutuk in Kamrup district, 50 km from Guwahati. The Guluktuk blast - &quot;The blast was carried out at the behest of the RSS and was executed by the organisation's youth wing with Abhijit Sarma as the kingpin,&quot; ULFA spokesman Raju Baruah said in a statement received by IANS. &quot;Sarma is a member of RSS's youth wing,&quot; the statement said. How can a place which is 100% Muslim - a bomb blast ? This is the main question which the local people's should think. 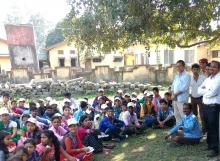 15 Nov 2013 - 7:56am | AT News
All of a sudden, people across the started buyins salt on Thursday. A section of businessmen picked up the first buck and started selling the essential commodity @ 200 per kg. Some others stocked...

6 Oct 2015 - 7:34pm | Siddhartha Handique
A huge Muslim organization in Golaghat district on Tuesday slammed Ramen Deka a day after the BJP MLA criticized the Muslim intellectuals for not raising voice of protest against the recovery of beef...