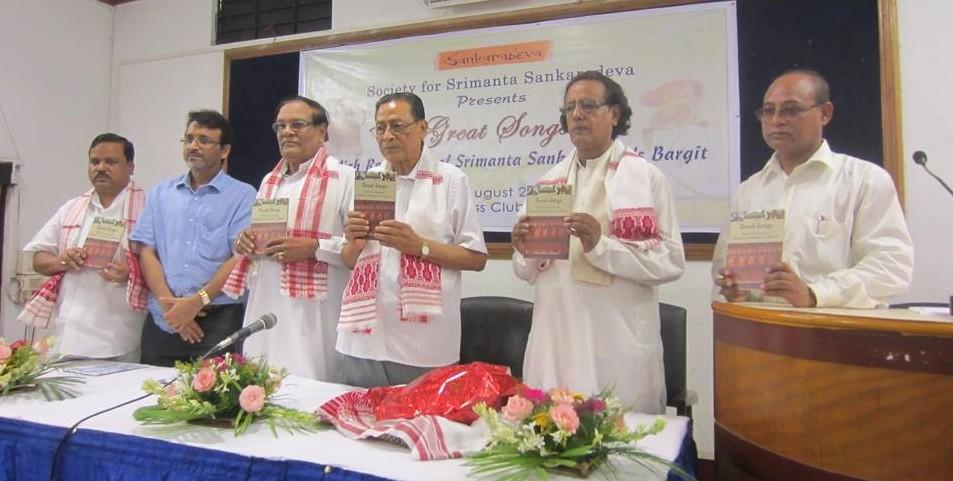 An English book of verse titled ‘Great Songs’ was released on Aug 26 in the Guwahati Press Club by eminent educationist Dr Kishori Mohan Pathak, formerly Vice Chancellor of Tezpur University. The full title of the book is ‘Great Songs — English Rendering of Srimanta Sankardeva’s Bargît’. As the name indicates, it is translation of 35 Bargîts composed originally by Srimanta Sankaradeva. Sankari scholar Dr Sanjib Kumar Borkakoti has translated the Bargîts into contemporary English. The book has been written to give readers across the world a glimpse into the philosophy of Mohapurusha Srimanta Sankaradeva.

Bargît is one of the main modes of conveying the principles of Eka Sharana Nama Dharma preached by the saint. These lyrics were composed in the 15th and 16th century. But till now it did not reach the global audiences. The book ‘Great Song’ is expected to fulfil that requirement, Dr Kishori Mohan Pathak said. Although some of the Bargîts had earlier been translated into English languag, there were not any complete translation of all the numbers and publication in a book form. The ‘Great Songs’ will now be available to the entire world and it is an effort to present the works of Srimanta Sankaradeva in global fora.

16 May 2015 - 6:07am | Syed Miraz Ahmed
The Hon'ble Supreme Court of India on Thursday has granted an interim stay to senior journalist Manoranjana Sinh in the criminal defamation case filed against by Chief Minister Tarun Gogoi. The apex...