Guwahati: Union minister for development of the north eastern region Mani Shankar Aiyar says the Look East Policy can be successful only when the region links with South East Asia.

Addressing a visiting delegation from Thailand on Friday in Agartala, Mr Aiyar says the South East Asia’s link with the north eastern region cannot come only through trade but through an integral business relationship.

Disclosing that the Government pins hope on as many as 50 more airports in the North East within the next five years, the minister this will help the region boost trade with the South East Asia.

According to Mr. Aiyar, some of the key areas of economic activity where Thailand has made its mark are rubber industry, bamboo industry, handlooms & handicrafts and natural gas. In the rubber industry the North Eastern region could take advantage of the Thai expertise and offer very fruitful investment opportunities.

Tripura and the entire North Eastern region should provide these investment opportunities to Thailand to mutually gain from such collaborations, he says.

With this kind of collaboration the present 30,000 acres under natural rubber cultivation in Tripura could be targeted at three times this area, he says adding that similar kind of collaborations could be worked out in Bamboo, Handlooms & handicrafts and areas of Natural Gas. He also emphasised the need to develop an impressive road network in the north eastern region.

Mr Aiyar maintains that the Government plans to put in $ 15 billion in road construction in this area adding that the Thai expertise in this area is most impressive and it can be used for building road transport infrastructure in the NE region.

He further says rail and air connectivity in the region is also an area of priority. About 600 intra regional air services within the region per week are expected to serve in near future.

Thai Minister of Commerce Mr. Krirk-krai Jirapaet says he is very keen on Indo Thai business relations and hopes that at the end of this three day visit many areas of such cooperation could be identified.

The delegation is visiting Guwahati and Shillong apart from Agartala during their visit. 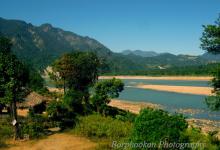 Earthquake may be the cause of Brahmaputra water turned muddy and black: Chinese Geologist

22 Jul 2019 - 7:50pm | AT News
Recent Earthquakes in Tibet are most probale cause of  muddy water flowing through the Brahmaputra for last two weeks. Chand Kumar Duarah, a science journalist based in Guwahati said that most...

8 Feb 2014 - 10:15pm | AT News
Narendra Modi’s speech in the Khanapara rally seems to have drawn mixed response form the political parties.Senior BJP leaders have called it an illuminating. But Congress, Left and AGP leaders have...

4 May 2015 - 9:14pm | AT News
The Garo National Coordination Committee and Garo Sahitya Sabha a paralyzing politics over the move to nominate a Garo member in the BTC.Addressing the reporters in Kokrajhar on Monday, GNCC general...