Some startling revelations seem to have surfaced when police raided a camp where top ULFA leader Hira Sarania stayed till he was arrested from Nalbari on Monday. A team of city police on Tuesday morning raided his designated camp and seizes an AK-56 rifle, 30 rounds of bullets and 12 lakh rupees in cash. 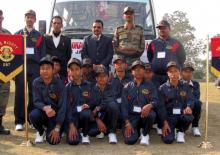