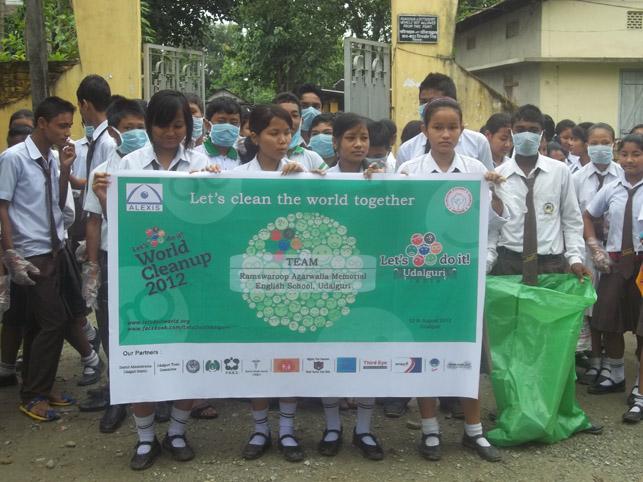 A unique campaign “Lets Do it! Udalguri”initiated by Alexis Society- Udalguri Chapter and Sigouguri Students Council held at Udalguri town on August 12 with day long programme. The purpose of the campaign was to clean the entire Udalguri township. Young,passionate,dedicated and highly motivated boys and girls numbering nearly two thousand joined hands in the clean up drive. This had been a part of the “Lets Do it! India” project initiated on “Lets Do it! World” (World Clean up 2012).The campaign has been managed by Alexis Society, an international non profit and non political organisation. It has been a civic movement of mapping and cleaning up the illegal waste lying in and around houses,buildings,apartments,wards,localities and public places. The aim of the campaign is to organise a series of clean up drives simultaneously in the different cities of India.The campaign had already been launched in Lucknow,Patna,Delhi,Thanjuvar,Dhanbad,Pune. Udalguri has been the first of its kind in NE.

The project seeks to increase awareness and educate public hence improving waste management. The clean up drive seeks to serve - A) to appeal people to become responsible citizens by keeping their surroundings clean and cultivating the habit of disposing the wastes at right places. B) to help the Municipalties.The Udalguri campaign was supported by 1800 students volunteers from 18 educational institutions. Lt.Col Jesus Furtado of 159 Field Regiment inaugurated the clean up campaign at 7 AM. Udalguri district administration along with several other organizations namely- Udalguri Town Committee, NDFB(P), NRHM etc participated in the campaign. Col.DK Bose,Commanding Officer, 159 Field Regiment under Red Horns Division addressed all the participants at the open session held at Bishnu Rabha Kristi Sangha at 11 AM. Maihursa Boro,Regional Governor,Alexis Society NE India supervised the whole campaign.

HS results on June 4; matric results to be delayed

30 May 2012 - 3:49am | editor
The Assam Higher Secondary Education Council will announce the results of the HS examination, 2012 on June 4.In a statement issued by the council on Tuesday, the council said that the results of...

29 Sep 2017 - 8:35am | AT News
Finally, the Central Bureau of Investigation has lodged a formal complaint against six unnamed officials of the Guwahati Metropolitan Development Authority (GMDA) in connection with the Louis Berger...