Despite sharp vigil, Guwahati still remains a transit route of drugs. Security forces seized a huge quantity of brown sugar from the Rajdhani Express in Guwahati on Thursday.
The brown sugar worth around Rs 30 lakh was intercepted during a routine check by the Railway Protection Force jawans in the morning. Two persons have been arrested in this connection.

24 Jan 2012 - 3:51am | editor
In yet another sensational case, a 27-year-youth from Assam committed suicide in Bangalore. His brother also has been charged with attempting to commit suicide in the same city on Sunday. Both... 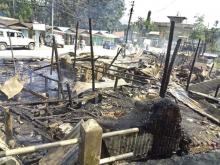 1 Jun 2019 - 8:00pm | AT Kokrajhar Bureau
Kokrajhar:  A massive fire has gutted  at Dadgiri Bazar along the Indo-Bhutan border in Chiang district. The fire broke out  due to cylinder explosion at a hotel that engulfed to...