2 Jan 2009 - 3:41pm | editor
There is report that army have arrested the main culprit behind the killing of journalist Jagjit Saikia in November in Kokrajhar. According to information, police arrested Chansarang alias Sanjiv... 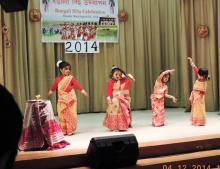 18 Apr 2014 - 10:38pm | Hitesh Kalita
Washington D.C Assamese community of   has been proudly celebrating Rongali bihu for past several years. The community gathered in Sally Ride School Auditorium on April 12, 2014 to...