Spices Board project comes up in Karbi Anglong

26 Jun 2007 - 5:20am | editor
Guwahati: Minister of state for commerce Jairam Ramesh on Sunday launched a new initiative of the Spices Board in Karbi Anglong district in the presence of Assam Chief Minister Tarun Gogoi.This... 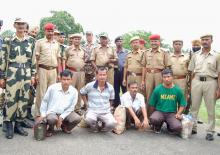