The heat and dust for the North Cachar Hills district council died down on Friday at five in the afternoon. The polls are scheduled on November 26 and December 1. No party could hog the limelight in the campaign in view of the
deteriorating law and order situation.

The Government is beefing up security arrangement to ensure a free and fair polls in the hills district. Altogether 57 candidates in the fray including Haflong’s sitting MLA and former minister Govinda Prasad Langthasa.

24 Sep 2015 - 7:48am | AT News
The Director General of Software Technology Parks of India (STPI) Omkar Rai has assured Arunachal Pradesh Chief Minister Nabam Tuki of centre at Itanagar at an earlier date.  Rai called on Tuki... 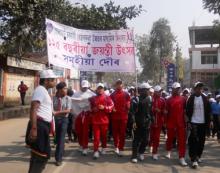