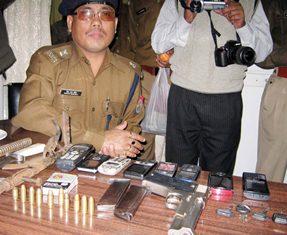 9 February 2012, Nagaon Police claims to have made a major break through with the arrest of one Rajib Banik alias Ajit Phukan , a self styled commander of a relatively new organistion , Black Rhino Commando Force (BRCA)and put an end to the recent spat of extortion , demand notes and firing on a business man in Itachali area of the Nagaon town.The subject is said to be trained as a ULFA cadre in different training camps at Mynamar, Karbi­­-Anglong etc.between 2004 -07.During this period fe was active in antinational activities. Later on 26/1/2011 he formed a new group namely Black Rhino Commmando Force (BRCA).

During his interrogation it iwas revealed that he was the mastermind behind the kidnapping of one Bappi Banik in connection withNagaon PS Case No. 1318/2011 and one other kidnapping case.

In a recent incident of firing on a town based business man on 22/1/12 he is the key accused. Apart from these he had served many demand letters/demand calls to several businessmen/persons/ servicemen in Nagaon town and created a fear physchosis among peace loving citizens of Nagaon.

Yesterday Rajib Banik was arrested by a team led by Nagaon SP Mr. Sunil Kumar and one 9 mm Pistol made in Spain, two magazines , 9 round live ammunitions , one handmade pistol, sharp weapons ,Sim , and 5 nos Mobile handsets etc were recovered from him.

Based on the statements of the accused , two more persons were picked up by the police for interrogation.

30 Jun 2008 - 7:07pm | bobbyramakant
NAPM demands immediate closure of the Counter-Insurgency and Jungle Warfare School at Vairengte in Mizoram Amidst protests against price rises of essential items throughout the country, the Prime...

22 Jul 2015 - 1:38pm | AT News
Sonitpur police have arrested eleven more villagers in Bhimajuli after they beheaded a loal woman branding as witch three days back.“They were arrested on the basis of the confessional statement of...