When creativity becomes an inspiration the results are passionate. Once passion becomes dedication work becomes worship then success is just a result. Hridoy Deka, a truly admirable boy from Assam whose perseverance, enthusiasm, dedication and hard work brought him to the extravagant world of name and fame.

Mumbai-the Mayanagar inspire millions to chase their dreams. Here we talk about a boy next door who pursued his dreams and become the part of "Amchi Mumbai". Hridoy Deka, hails from Rangia, son of Mr. Chitradhar Deka and Mrs. Pramila Deka steps into the dreamy, creamy world of Bollywood as soon as he completed his Management studies from Pune. His passion for Film Making has given him the wings to struggle and linger him to the present position. 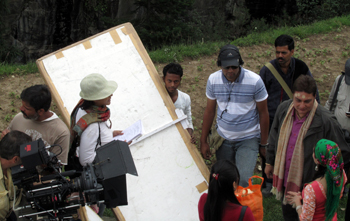 .. while shooting for Tere Mere Phere with Vinay Pathak & Riya SenHe has started his career in Film Making with distinguished film maker Ketan Mehta in "Rang-Rasiya” (yet to release) which is produced by Maya Movies Pvt ltd & Infinity Film Entertainment. After which he immediately got involved with the next venture of Maya Movies Pvt Ltd “Na Na Karke Pyar” .His association with Maya Movies lasted long and eventually he branched out to earn various other films into his credit. Apart from Films, he has also ventured into Short Films, Documentary, Corporate Film and Event Management and could contribute outstandingly. His passion for Film Making has widened his spectrum which resulted into involving himself in Art Direction, Editing even bit into Acting! he has acted in Tere Mere Phere (2011)and upcoming film Baromas . Mr. Deka has not restricted himself to Hindi Films; he has managed to work for Hollywood project as well –“When Harry Tries to Marry”, by Nayan Padrai and produced by WHTTM Inc. which was shot by the renown Hollywood star Julia Roberts husband Daniel Moder. Hridoy Deka on behalf of Blue Berry Events has recently organized a concert of “Shankar Ehsaan ,Loy “(Dec-2011) in Pune which was tremendously successful. Apart from films, documentaries, events, Hridoy Deka also worked for Music Videos sung by Utaad Sultan Khan, Sandhna Sargam and Suhel Khan etc.

2012 Baromas (Worked as Chief AD, starring Seema Biswas), this film is expected to release by 2012 and currently Mr.Deka is handling the Post Production.

2011 When Harry Tries to Marry (Hollywood film and Mr. Deka was involved with the Direction team from India)

2008 Ocean of an Old Man (as AD, starring Tom Walter. This film was screened in various International Film Festivals)

After few initial years of struggle Hridoy Deka could finally cut a niche for himself in Bollywood through his dedication, passion and hard work. We wish this young energetic Film Maker good luck and long to see good creative results out of him.

Let’s raise the toast for the rising and shining star of Assam here in Mumbai!!! 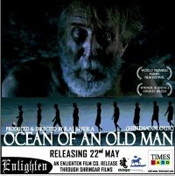 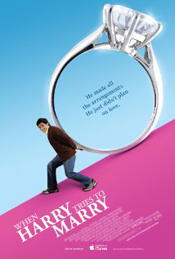 I just finished watching the

Permalink Submitted by Sandeep Bora. on Mon, 13/10/2014 - 02:12
I just finished watching the movie "When Harry tries to Marry" and was reading the cast and crew list shown in the end. I suddenly came across the name Hridoy Deka and then googled his name and found your blog, which contains a lot of information about him. I had never heard of him before and this guy has already worked on so many projects. Assam should be proud of him. Regards,Sandeep Bora.

8 Sep 2014 - 10:53am | SK Hasan
Defying Supreme Court directives, Illegal coal tradings are going on in Nazira without any hindrance. Behind this illegal tradings are a section of police officials who have been aiding and...

28 Jun 2015 - 10:28am | AT News
A moderate tremor damaged no less properties in many parts of lower Assam on Sunday.Measuring 5.7 on the Richter scale originate in Basugaon, the tremor was felt in Kokrahar, Chirang, Bongaigaon and...

1 Feb 2018 - 9:06am | AT News
SIVASAGAR: Security forces are fanning along the Assam-Arunachal Pradesh border in Charaideo to combat the suspected ULFA(I) rebels who triggered a reign of terror on Wednesday night with...