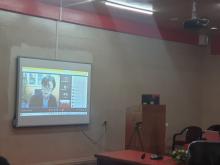 Int'l School for Children with Neuro Disorders concludes at NEHU

31 Oct 2021 - 11:43am | AT News Shillong
The Department of Biomedical Engineering, in collaboration with the Department of Education, North Eastern Hill University, Shillong organized an International Brain Research Organization (IBRO) APRC...

20 Dec 2011 - 2:59pm | Jayanta Kumar Das
After the runaway success of the ‘Udalguri Youth Festival’ during the past year, the Kargil Gunners of Red Horns Division in collaboration with ‘Janasewa’, a Tangla-based news...

1 Aug 2015 - 2:29pm | AT News
Security forces are fanning in Goalpara district in search of a group of dreaded ULFA militants who are believed to have been hiding to strike in the run up to the Independence Day.Army, police and...