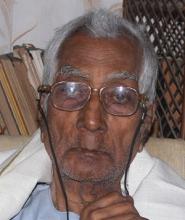 7 May 2015 - 8:50am | AT News
Dr Amalendu Guha is dead leaving the entire state in a pall of gloom on Thursday.The end came for historian and social scientist at his own residence at 3-45 in the wee hours where he was keeping...

2 Mar 2008 - 5:31pm | Nagendra Sarma
Having felt the grave situation in Karbi Anglong and suspecting mass killing of Hindi speaking people belonging to labor class like last year the security forces deployed in the district asked the...