Its some sort of respite for Mahendra Das. He need not go to the gallows till November 1. The respite comes from the Gauhati High Court on Wednesday which was hearing a petition moved by his mother alleging violation of human rights when the president Pratibha Patil delayed in clearing the decks for Mahendra’s executive order.

11 Jul 2012 - 2:31am | editor
A huge fund meant for uplift of the minority people went to the Centre because of some bunglings in Dispur.The allegation came from the Rajiv Bhawan where the party’s minority cell said that... 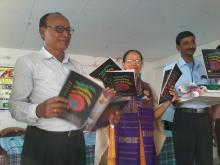