More than 10,000 people at Bokakhat took out a rally on Wednesday morning in support of Anna Hazare who has been on fast for Jan Lokpal bill. The crowd include members of several NGOs, students, etc. The Bokakhat town market was closed during this rally. 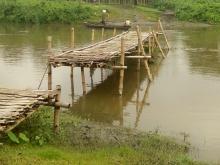 Bridge over Nonai river washed away

9 Jun 2017 - 6:12am | Shajid Khan
The incessant rainfall since the past couple of days has resulted in rise in waterlevel of river Nonai. The makeshift river bridge at Tia Phukuri ghat has been washed away on Thursday by the water...

CM gets tougher with BTAD miscreants

7 May 2014 - 11:51am | AT News
JINTUL TALUKDAR FROM NARAYANPURChief minister Tarun Gogoi said that his government will not spare anybody if found guilty in the BTAD carnage.Talking to reporters in Narayanguri after interacting...