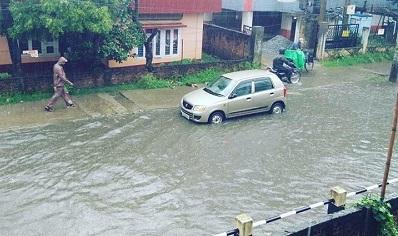 Normal life in Guwahati remains paralyzed on Tuesday after heavy downpour brought brimful misery in the form of massive waterlogging for thousands of denizens in the premier north eastern city.

Incessant rains which lashed Guwahati from Monday night ended in the morning after many vital areas were caught in the rainwaters. Over 60% of the city has come under the rainwaters forcing the closure of many shops and markets, schools and colleges on Tuesday.

The worst hit areas include Ambari, Silpukhuri, Chandmari, Christianbasti, Anil Nagar, Nabin Nagar, Lachit Nagar where more and more areas have come under the rain waters which refuse to recede because of a swollen Bharalu river.

SDRF jawans are remaining well prepared for rescue operation while senior district administrative officers have been monitoring the situation.

A massive traffic snarl has added the woes on the busy GS Road, RB Baruah Road, where hundreds of vehicles have been remaining stranded for several hours.

5 Nov 2011 - 11:52pm | editor
Assam Times joins India in mourning the passing away of the legendary Dr Bhupen Hazarika. May God rest his soul in peace. This great loss has been mourned by a lot of people. Some excerpts Jitu... 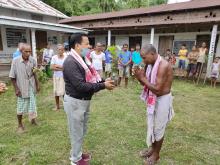 5 Jun 2020 - 9:42pm | Parshwa Patgiri
The student based NGO New Hopes Foundation has always been on the frontline for different activities like blood donation, providing books for economically backward students, providing cloth to the...

One more Rhino killed at Kaziranga

5 Jul 2007 - 7:17am | editor
One more Rhino was discovered dead in the famous Kaziranga National Park, home of the one horned Rhinoceros. The “Gar Kharga” (horn) of the Rhino was missing. A total of seven rhinos have...