Another Logjam in Peace Process

Our Correspondent
Guwahati: A war of word between Assam Chief Minister Tarun Gogoi and peace broker Mamoni Roisom Goswami may put the peace process in yet another logjam.

Talking to a vernacular daily on its Monday issue, the award winning writer says she is not satisfied the way Mr Gogoi urges her to rush to Bangladesh.

“If need be I am ready to leave for Bangladesh with Rebati but it must be a decent appeal.”

“Let the Government make necessary arrangement to go to Bangladesh. I will do it tomorrow itself. But it will not be my personal initiative. The Chief Minister knows: how a top ranked leader of a banned outfit can be met.”

She rues that she finds it difficult it ti understand what Mr Gogoi says these days.

Notably, in a recent press conference Mr Gogoi said, “let Mamoni Raisom Goswami meet Paresh Baruah or Arabinda Rajkhowa and convince them to come forward for talk, as direct contact with them is necessary for talks.”

Mr Gogoi also said it was strange that Mamoni Raisom Dr Goswami was maintaining silence on the Hajo blast. According to Mr Gogoi, “she has not condemned the incident, which I feel is rather strange.”

It may be recalled the entire peace process was revived recently while a forum headed by the professor with Delhi University called on Prime Minister Dr Manmohan Singh in Delhi and urged him to revive the process.

When the delegation called on National Security Adviser MK Narayanan sought a direct proposal to the Government from the ULFA top brass to this effect.

The Chief Minister further asserted that the Centre’s stand on talks with the ULFA was clear, he said direct contact with the top leadership of the outfit was necessary for the purpose.

Permalink Submitted by Sanjoy Hazarika on Thu, 28/06/2007 - 12:51
What is this&quot; peace process&quot; that people are writing about and so excited about, especially the media. You have a group of well-meaning people who do not have any independent contact with Ulfa, as far as I can see, and certainly no clear authorization from them to negotiate. All that this group is doing is requesting the Govt. of India to &quot;talk&quot;. The GOI has said it won't until Ulfa leaders come for talks unconditionally. This, the latter have said, they won't. So what peace process are we talking about -- it has no support from either side and is obviously not regarded seriously by too many people in the state and other parts of the NE. It would be better is the media took a dispassionate look at the whole issue instead of rushing into print or broadcast every time. In this case, we have a group of well-meaning citizens wanting to promote peace, which of course is commendable but does not go very far. It is important to note that the PCG, which has set up by Ulfa, may be defunct but it has not been disbanded. 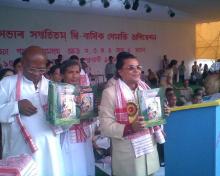 Chidambaram in Guwahati; to discuss security with Gogoi

25 Jan 2014 - 9:57pm | AT News
Much to a major relief, a hardcore ULFA militant has surrendered before Guwahati city police a day before the Republic Day on Saturday.Identified as Gautom Nath alias Chetia surrendered before senior...