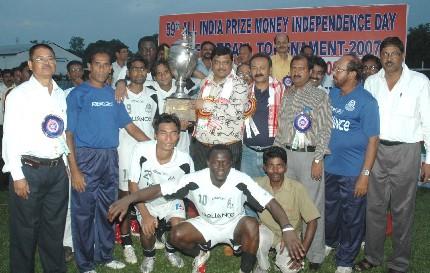 Mohammedan Sporting Club of Kolkata won the Independence Ccup football title beating last year's champion BSF, Jalandhar 3-2, via tie break, in the final held at Nagaon on Thursday. The schedule and extra time of the match were ended goalless.

It was the fourth occasions that Mohammedan Sporting Club won this prestigious Iindependence Ccup title .

V Ram Kumar, Mike Okero and Adibaeo converted the spot kick successfully for Mohammedan Sporting. On the other hand, P B Ekka and Amarjit Singh scored the goals for BSF, Jalandhar .

Forest Minister Rockybul Hussain and Ssecretary of the Assam Football Association Ankur Dutta were present in the closing function and also distributed the prizes.

6 Jan 2015 - 5:14am | AT News
NIA director general Sharad Kumar is on a 3 days visit to Guwahati to review the probe into the recent Adivasi carnage in Sonitpur and Kokrajhar districts.Kumar is scheduled to meet the NIA officials...

28 Jun 2008 - 4:19pm | editor
A devastating fire that broke out in the city’s Lakhara area has completely gutted a biscuit factory on Saturday. According to information, the source of the fire that ravaged Krishlay Snacks...