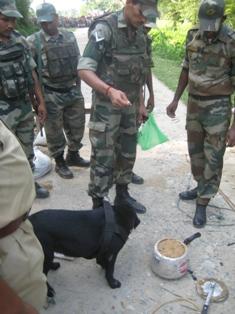 A powerful IED weighing 5 kgs was recovered by 315 Field Regiment (KARGIL) of Red Horns Division on the morning of June 25 in the village Uttar Kuiabil (under Kalaigaon Police Station) on the busy road connecting Harisingha to Kalaigaon.Source reveal that some local children of the village had observed some freshly dug earth along the road in the wee hours and informed the village elders who in turn informed the the Army.At the same time, three unidentified persons were also seen roaming around in the area. On receipt of the information, the troops of 315 Field Regiment (KARGIL) rushed to the site and cordoned off the area. The locals handed over one of the suspicious person to the army while one managed to escape and the third one was in the Govt Hospital, Harisingha after being beaten by the locals. The apprehended persons are Subung Boro and Imanuel Basumatari. Imanuel Basumatari told media persons that he had been paid an amount of Rs.500 along with bottles of wine for planting the bomb. The cooperation by the villagers indicate a definite tide in the favour of the Government with the local population willing to march towards peace.