Some unknown persons triggered two bombs at the residence of a social worker at Kamfasong village, Fungreitang about 3 km east of Ukhrul police station in Ukhrul district of Manipur, official sources said. The two bombs were blasted after landing at the courtyard of social worker, Simthi R Simarei(55) around 9:25 pm on Sunday. No group has so far not claimed responsibility. A case has been registered at the Ukhrul police station in connection with the twin blasts. 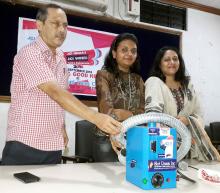 9 Sep 2016 - 4:17pm | AT News
For the benefit of lady member-scribes of Guwahati Press Club (GPC), a sanitary napkin destroyer machine was launched on Friday (9 September 2016) in the club premises. Sponsored by Junior Chamber...

27 Jun 2010 - 1:59am | Jayanta Kumar Das
The alarming increasing rate of trafficking of children, adolescent girls and women has now been considered to be the most important social problem of not only Udalguri but BTAD districts as well.the...