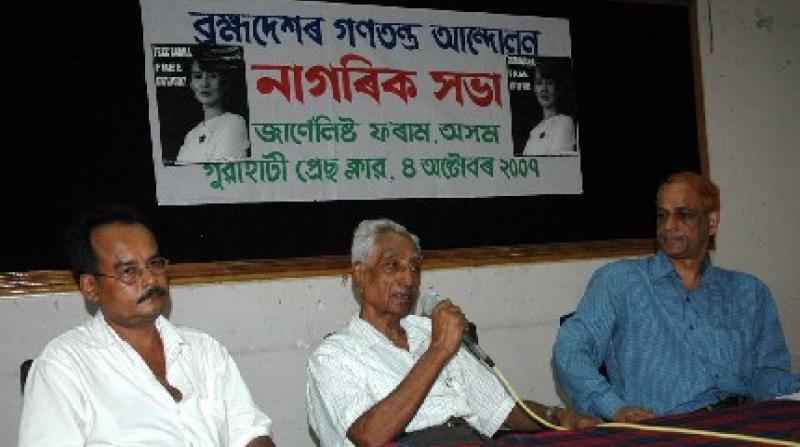 The Journalists' Forum, Assam on Thursday urged the Government of India to create diplomatic pressure on the Burmese junta to refrain from repressive measures against those carrying on the democracy movement in the country.

In a citizens' meeting at the Guwahati Press Club with JFA president Rupam Baruah in chair, the newsmen's body asked the Union Government not to remain silent on the happenings in the neighbouring country and do the needful within its powers to facilitate a peaceful transition to democracy.

Extending its whole-hearted support to the movement, the Forum demanded that Aung San Suu Kyi, the globally recognized pro-democracy leader, be immediately released from the prolonged detention she is being made to undergo. It deplored the brutal killing of protesting citizens including one foreign journalist.

The meeting expressed its solidarity with the proposed Global Action Day for Free Burma to be
observed on October 6.

Photo: Citizens meeting in progress at Guwahati Press Club of Northeast India on October 4 to discuss the Burmese issue. The meeting, called by Journalists Forum, Assam has resolved to urge New Delhi to change its policy on Burma and use its diplomatic pressure on the military junta to immediately stop the crack down on the pro-democracy activists and finally support the democratic movement led by Aung San Suu Kyi.

Delhi CM tweets for treatment of a dying tusker

20 May 2016 - 3:27pm | Jayanta Kumar Das
A badly injured eight years old wild tusker has been battling for life since May 18 at a remote village in India-Bhutan border in Udalguri district.The injured wild tusker had been very weak while...

10 Sep 2015 - 8:26am | AT News
Amid an aroused brouhaha over the government’s move to hand over 69 oil wells to private companies in Assam, a section of economists have thrown their weights behind the decision. Talking to Assam...