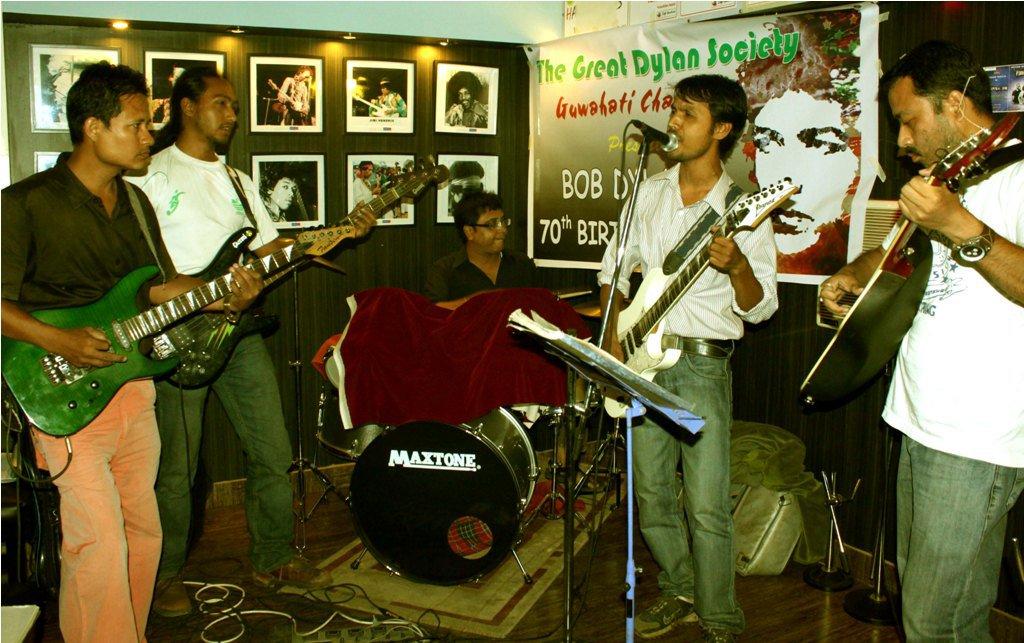 Legendry Poet, singer and composer Bob Dylan was given a salute by fans on his 7Oth Birth Day at Café Hendrix, organized by “The great Dylan society” (Guwahati Chapter) in Guwahati, thus joining the league of Dylan’s birthday celebration. In shillong Bob Dylan’s birthday celebration spearheaded by singer Low Mojaw have already reached a great height that needs no introduction to the world. It was the 39th celebration this year. Dylan birthday in Shillong has hosted since 1972, the year Meghalaya attained statehood.

The maiden celebration of Bob Dylan’s birthday at Cafe Hendrix, have brought hopes of good and meaningful music for music lovers in general. The cozy café though with small space never lacked the spirit of celebrating Dylan’s birthday with good songs performed mostly by matured musicians and other music lovers present among the crowds.

“STAGS” a local band opened the stage with Bob Dylan number “Knocking on heaven’s Door followed by “Blowing in the Wind” and others. The organizers have plans to celebrate Dylan’s birthday in a bigger way in the near future.

8 Sep 2019 - 12:07am | Nikhil Mundra
Body of 14 years old Sumit Baspor S/O Sambhu Baspor and resident of Harijan Colony rescued on Saturday Morning. As per information, Sumit got drowned in Dimru river in Hojai on Friday eevening,...