Long queues of people could been seen in front of almost all the ATMs of the Nagaon Town today. The irony is that people have to wait for hours queuing on the roads in front of the ATMs, just to withdraw their own hard earned money. This has served as a real dampener for the Rongali Bihu festivities of the local people.

It is high time that minimum banking services are provided to the common man, or will it take another Anna Hazare to ensure the same. Time to take stock.

30 Jan 2015 - 8:45pm | Nava Thakuria
The city based downtown hospital in association with Guwahati Press Club has organized a general health check-up camp for scribes with their close family members on 5 February 2015 (Thursday) in the... 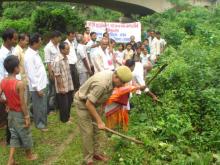 25 Sep 2010 - 7:11pm | np2396911
A social work program was held on September 19 at Jhanji, Teok near west end of the Jhanji bridge organized by Jhanji Suramoni village defense party (VDP) a well other organization in the area...