As the 13th Assam Assembly Election is nearing, all the political parties have been migrated the high profile leaders to the remote areas made the election scenario of Barpeta also warm.The wave of election started in Barpeta district also like other places of the state. The BJP leader Barun Gandhi today attended in an election meet at Barpeta Vidyapith playground. Addressing in the meet the BJP leader Barun Gandhi said that there is no seat for anyone else in BJP who has the power and pelf.

The person who worked for the sake of the general people is given the importatnce in this BJP party. BJP this time give importatnce to the new faces as well as the youths to proceeded towards their goal which is only to dethrone the congress at any cost. He also added that this time the people need a change as they were fade up with the corrupt rules of congress during last 10 years. That is why he urged the people of to make this change true and vote for BJP. Moreover he said that BJP never need any high profile leader,rather BJP only wants a delegate of the general people so that the people would be able to reach to their candidate.

13 Sep 2014 - 6:15am | AT News
The Chennai police have busted a notorious human trafficking racket in Assam arresting a 25-year-old man on Friday.Police caught the person from Assam acting on inputs by an autorickshaw driver who... 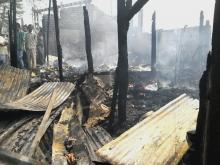 12 Mar 2016 - 2:54pm | Hantigiri Narzary
Over 15 shops along the Fakiragram main Bazar in Lower Assam’s Kokrajhar district have turned into ashes.  The fire damaged worth of nearly 50 lakhs properties following fire in gutted on Friday...