A straight contest among Congress-BJP-AGP are on the cards a 120 Naharkatia LAC of Dibrugarh District in first phase election to be held on April 4. Current MLA Pranati Phukan, AGP Naran Sonowal and BJP candidate Pradip Buragohain will also play vital roles in the forth coming election.

On March 28, B.K.Handique Minister for DONER, attend an election rally at BVFCL play ground, and he emphasized on the all around development of the state in last 10 years under the Congress regine. Hera Handique mentioned that they are came forward to set up Namrup IV plant in BVFCL Namrup. Handique said that the proposal has been submitted to the Minister of Chemicals and Fertilizer New Delhi after detail study by renowned consultants in the field. The involvement require a huge funds amounting to Rs 3300 crores. However hopeful that the effort of all concerned will transform dream of Namrup IV in to reality said Handique. MLA Pranati Phukan too attend there and highlighted the several developmental activities already implemented.

Since independence, the constituency has been ruled by Congress. In the last 2006 Assembly polls Pranati Phukan won the Naharkatia LAC by defeating AGP alliance candidate CPI-M Dibya Kowar at a margin of 19500 votes. On that term Pranati Phukan of Congress got 40,065 votes, while CPI-M candidate got 20,511 votes.

One killed, another attacked

13 Jul 2016 - 9:17pm | AT Kokrajhar Bureau
A NDFB cadre was killed at Choibari area following firing while were coming from Guwahati after producing in NIA case. On the other hand, Dahit Chandra Brahma was attacked by unidentified gunmen at... 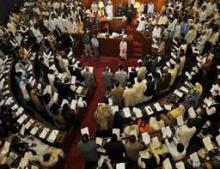 23 Feb 2018 - 11:54am | AT News
GUWAHATI: Assam Assembly Speaker Hitendra Nath Goswami has expelled Congress legislator Sherman Ali for creating uproar on the floor on Friday. Ali, the legislator from Baghbar was taken out of the...

25 Aug 2017 - 8:37pm | Akshaya Pranab Kalita
For the first time in the north eastern region Namrup is gearing up to celebrate 3rd anniversary of Shree Ram Sharnam Ashram on August 30 and 31. The event will start with Amritvani and Bhajan with a...