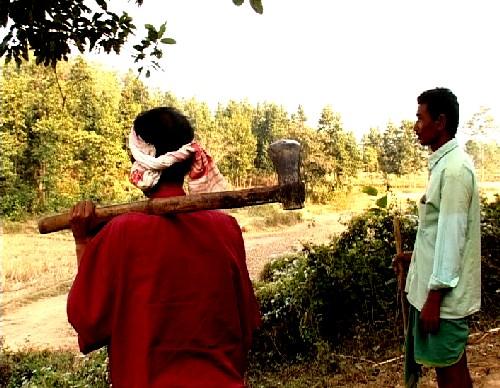 Taking a stroll around the village of Sijubari No.1, in Kamrup district of Boko, would remind few lines of Poet Robert Frost,

"Whose woods these are I think I know.
His house is in the village, though;
He will not see me stopping here
To watch his woods fill up with snow."

The mesmerizing forest cover of Sijubari village however misses the snow only, but the woods are lovely, deep and dark. At the very first sight of the forest one would naturally wonder as how these beautiful woods have not been affected by destruction that has deteriorated the forest scenario in the entire state of Assam.

This normal forest cover engulfing the sijubari village is said to be more than 25 hectors of land. and once it had faced rapid destruction from the villagers itself, however the villagers soon realized that something was not going in the right direction for the future generation. This realization brought a change in the village community and the villagers had decided to protect their forest cover till they exist. It is just some 12 years back the villagers’ effort had brought a drastic change around their village and at this juncture a healthy forest cover is what one can see moving towards the village through a narrow lane from the Boko National Highway.

The thick forest cover of “SAL” and “SEGUN” trees were once planted by the forest department. But the officials of the beat forest office inside the village had abandoned the village long time back leaving the fate of the forest in the hands of the villagers.

The sleepy hamlet of Sijubari resided by mostly Bodo tribe was set up more than 100 years ago. However, till date Electricity is not yet available in the village, a LP school, a decorated Club house and a poor playground are only the other asset of the village besides the forest cover. The village has some 95 families and mostly dependent on farming, collecting firewood and doing other works. However the people of the literally undeveloped village have a great sense of awareness about the shortcomings of deforestation in the near future.Topeshwar Boro, the village headman agrees that due to deforestation there is change in the climate, the amount of rainfall has receded and if preservation is not done the future generation will not know about the trees. “I want that other villagers to do the same as we are doing” he adds.

Special awards are being given for catching smugglers and a particular tree felled by the smugglers can be a good prize. One has also have to pay a fine of R.20 if he remains absent during his duty hours. As far as punishment for the smugglers is concern a village court decides the fate of the culprit, however the Villagers makes it a point not to go to the police station when the culprit is within their people or from the neighborhood. A sum of Rs.800 is charged as fine if caught for the first time and the amount is doubled provided caught for the second time. However the villagers are allowed to collect firewood and woods for domestic use only.

We have never received any help from the forest department and we don’t have much faith in them. They had earlier promised us to give torch lights but we never got it. But we will always keep up our duties. Says Bhadreshwar Boro, a middle aged man.

So next time when you encounter a group of villagers with axe, sticks and other small weapons in the forest towards your way to Sijubari, don’t misunderstand them to be the enemy of the forest.

26 Jun 2008 - 1:22am | Nava Thakuria
Eminent scientist and educationist Dr Kulendu Pathak will attend the 'Guest of the Month' programme of Guwahati Press Club tomorrow (June 26). The programme will begin at 1 pm. The former Vice...

18 Jun 2016 - 10:47pm | AT Kokrajhar Bureau
A seminar on the topic of 'Oral poetry, Performance and Aesthetic' was held on Saturday at UN Academy with a day long programme in Kokrajhar district. Altogether 12 resource persons from different...

Govt. confident to bring back peace in Assam: Pradyut

18 May 2010 - 12:25pm | sankal
The Assam Government spokesperson Pradyut Bordoloi, who is also holding the post of Cabinet Minister of Power, Industries...