With the demands like 1.To release the DHD (J) leaders 2. To resolve the demands of DHD (J) and 3. Peace settlement in the district of Dima Hasao,the Dimasa Mothers' Association & Dimasa Women Society stage Dharna in front of DC office at Haflong today.

Both the organizations later submitted a memorandum to the Chief Minister, Assam Sri Tarun Gogoi through the Deputy Commissioner, Dima Hasao. The memorandum stated that it was important to mention here that the Dimasa Mothers’ Association and Dimasa Women Society was involved in bringing the DHD(J) to surrender their arms for peace talks with the Government, therefore as responsible organizations the DMA and DWS felt that it was very necessary to get involved in this crucial moment, so that permanent peace would prevail in the district of Dima Hasao.

After the DHD(J) had surrender their arms for peace talks on October 2, 2009 led by C-in-C Niranjan Hojai, the DMA and DWS felt that the Government have not been sincere in the same positive manner and have failed to take all necessary possible steps to resolve the issue. The DMA and DWS have understood that the Government had tacitly agreed in principle to fulfill the charter of demands of the DHD(J) wherein it has been clearly stated that ‘ General Amnesty be given to all the members of the DHDJ) irrespective of rank and files’ therefore e all the NIA,CBI, ED and other cases imposed to the leaders and members of the DHD(J) should be withdrawn immediately and released all the members of the DHD(J).

The demand for an autonomous state within the state for the district of Dima Hasao which was enshrined in the Constitution of India has been going on since 1985. The Government should realize that the demand for an Autonomous State was not confined to the demand of DHD(J) alone but it was a popular demand of the people of Dima Hasao therefore they perceive tht the lasting political solution to their grievances were implementation of Article 244(A) of Constitution of India.

The arrest of Sri Mohet Hojai, Ex- CEM of Dima Hasao Autonomous Council was still shrouded in mystery because of the fact that he was arrested by the Assam Police after more than two months of his alleged link with militant. The DMA and DWS wanted to know who helped Mohet Hojai to stay hiding for couple of months and after resurfaced, how come the same police department escorted him from Guwahati to Haflong.

The DMA and DWS are of the opinion that Sri Hojai was conspired bt the vested interested person and was has him for their own gains therefore Mohet Hojai should be granted bail immediately and a fair trial be given to him.

The DMA and DWS also beseech upon the Chief Minister to devise mechanism to monitor the flow and utilization of fund so that development may take place in the true sense of term, the memorandum concluded.

28 Jan 2013 - 7:04pm | AT News
Dr Debo Prasad Barooah no more. The veteran thinker and educationist passes away on Monday. He was 83.The end came at 4-30 in the afternoon after the International Hospital where he was undergoing... 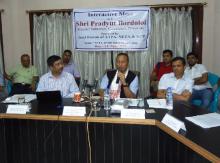 4 May 2014 - 4:03pm | AT News
Security forces recovered two more bodies from two different places in Baksa district on Sunday. with this the death toll in the BTAD violence has gone up to 36 during the last 40 hours.Border area...